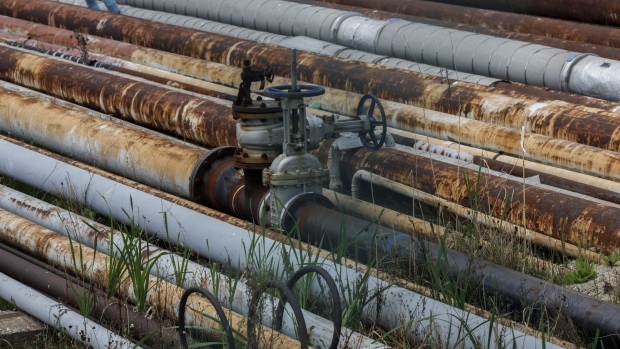 Pipes lead to an Imperial Oil Ltd. refinery near the Enbridge Line 5 pipeline in Sarnia, Ontario, Canada, on Tuesday, May 25, 2021. Enbridge Inc. said it will continue to ship crude through its Line 5 pipeline that crosses the Great Lakes, despite Michigan Governor Gretchen Whitmer's order to shut the conduit. Photographer: Cole Burston/Bloomberg , Bloomberg

(Bloomberg) -- Oman energy firm OQ SAOC plans to sell up to 49% of its oil drilling unit ​Abraj Energy Services SAOC in an initial public offering, kick-starting the sultanate’s push to join a listings boom sweeping through the Middle East.

The subscription period will start in February and the shares are expected to start trading on the Muscat stock exchange in March, according to a statement. The IPO could raise as much as $500 million, Bloomberg News reported in September.

Oman is joining its energy-rich Gulf neighbors — especially the United Arab Emirates and Saudi Arabia — in selling assets to fund the diversification of their economies and open up their stock markets to more international investors. The drive led to a banner year for IPOs in the region in 2022, defying a global slump in share sales caused by fears over high inflation and interest rate hikes.

The Oman Investment Authority said in December that it plans to raise more than $1.3 billion by exiting its investments in eight sectors this year, from energy to aviation, tourism and communications and information technology. OQ is also planning an IPO of its gas pipelines unit that could raise as much as $800 million, Bloomberg News reported in September.

Still, Oman has a long way to go in its IPO journey. It hasn’t had a major listing since 2010 when telecom operator Nawras, now known as Ooredoo Oman, raised $475 million.

Oman and Bahrain are the only countries in the six-nation Gulf Cooperation Council not classified as emerging markets by MSCI Inc. The market capitalization of Oman’s stock exchange is about $22 billion, according to data compiled by Bloomberg.

Oman pumps around 1 million barrels of oil a day. While it’s not a member of the Organization of Petroleum Exporting Countries, it is part of the wider OPEC+ alliance. Its finance ministry said in December it estimated the country will boost oil production by more than 10% this year to 1.175 million barrels per day.