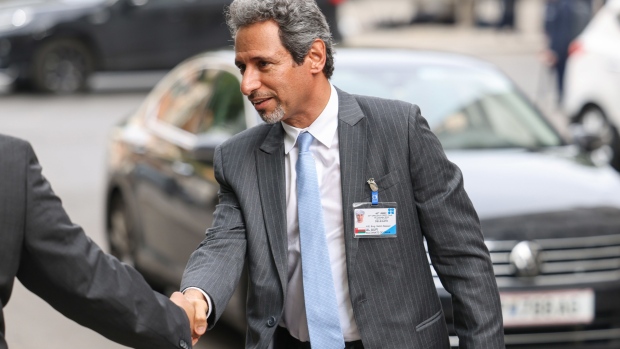 Salim bin Nasser bin Said Al Aufi, Oman's energy minister, arrives ahead of the 33rd meeting of the Organization of Petroleum Exporting Countries (OPEC) and non-OPEC countries in Vienna, Austria, on Wednesday, Oct. 5, 2022. OPEC+ is considering its biggest production cut since 2020 as it tries to stabilize oil prices, a move that risks cranking up tensions with Washington. , Bloomberg

(Bloomberg) -- Oman’s energy minister said there’s widespread unease among oil-reliant economies over the cap that the Group of Seven nations has imposed on the price of Russian barrels.

“I don’t think anyone likes it,” Salim Al-Aufi said in an interview in Muscat. “We don’t know how far it will go. Today, it’s Russia. But tomorrow that can change and it could be a global price cap. That would be extremely serious.”

The G-7 this week slapped a price ceiling on Moscow’s oil exports, a move that Washington insists is purely about Russia: keep its oil flowing while starving it of funds for the war in Ukraine. Introduced in tandem with a European Union ban on seaborne Russian crude, any nations still buying must pay $60 a barrel or less, or lose access to key shipping services supplied by EU and G-7 firms.

The restrictions will probably lead to less investment in oil production globally, according to Al-Aufi. He spoke days after OPEC+ — a 23-nation coalition that includes Oman and is led by Saudi Arabia and Russia — met to discuss policy. The alliance agreed to hold output steady, having decided in October to cut supply by 2 million barrels a day in a move that angered the US.

Oil soared after Russia sent troops into Ukraine in February, with benchmark Brent topping $127 a barrel. But it’s since slumped below $80 as the risk of slowing economic growth in the US and Europe, and lingering virus curbs in China, stoke demand concerns. Adding to that weakness is a view among traders that the price cap was set high enough to ensure Russia won’t need to rein in output.

When OPEC+ convened on Sunday, delegates discussed the “reduced expectation in terms of demand,” Al-Aufi said. “That is the concern we all have at the moment. We don’t think the market is ready to receive additional volumes.”

Oil has slumped around 10% this week, but steadied on Thursday as the Chinese government moved to ease virus restrictions.

It’s still too early to say whether the tentative reopening will lead to higher consumption in the world’s biggest oil importer, Al-Aufi said.

He added that OPEC+ felt the latest data didn’t justify another reduction in supply.

“Any additional cut was likely to send a negative message to the market,” he said. “For now, we’re holding to October’s decision. But that doesn’t mean we can’t respond if we think the market is oversupplied significantly, or undersupplied. We can convene at any time.”

(Updates with comments on price slump.)