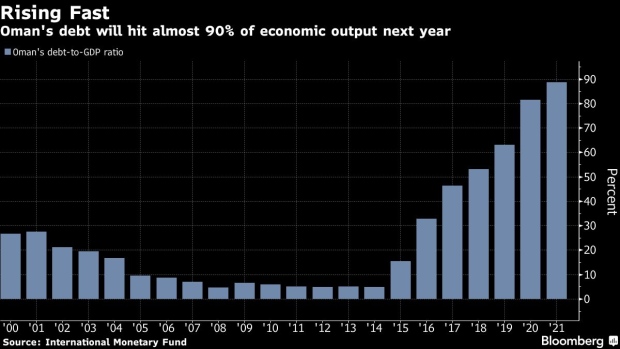 Oman is seeking to raise money off the back of its largest oil block, as the cash-strapped Gulf nation looks for new ways to tame its budget deficit and steady a reeling economy.

The sultanate is transferring its 60% stake in Block 6, which has a production capacity of 650,000 barrels a day, from Petroleum Development Oman to a new company, according to three people familiar with the matter. The company would then tap international financial markets, allowing Oman to raise debt without putting it on the government’s books, they said, asking not to be identified because they’re not authorized to speak to media.

The new firm may try to sell around $3 billion of bonds in the first half of next year, one of the people said. JPMorgan Chase & Co. is advising the government, the person said.

The proposal could set a precedent for other oil and gas producers in the Middle East that want to raise cash without stretching their balance sheets. Iraq’s Kurdish region sells some oil before it’s pumped under so-called pre-payment finance deals, and the United Arab Emirates has raised billions of dollars this year by selling leasing rights to pipelines and properties. But no Middle Eastern government is known to have used specific oil blocks as collateral for funding.

The structure for Oman would probably be similar to the reserves-based lending facilities that are common among U.S. shale producers.

This year’s collapse in energy prices and local shutdowns to stem the spread of the coronavirus have hammered Omani businesses and the government’s finances. The budget deficit is forecast by the International Monetary Fund to reach almost 19% of gross domestic product this year. The economy will contract 10%, the most in the six-nation Gulf Cooperation Council.

The government itself issued $2 billion of bonds last month. Its ratio of debt to GDP has soared since 2014, when it was just 5%, and will reach almost 90% next year, according to the IMF.

Sultan Haitham Bin Tariq Al Said has cut spending and instigated economic reforms previously thought unthinkable since he came to power in January. His administration plans to introduce income tax in 2022, which would be a first for an Arab Gulf state. It’s also slashed thousands of government jobs and said it will remove water and electricity subsidies by 2025.