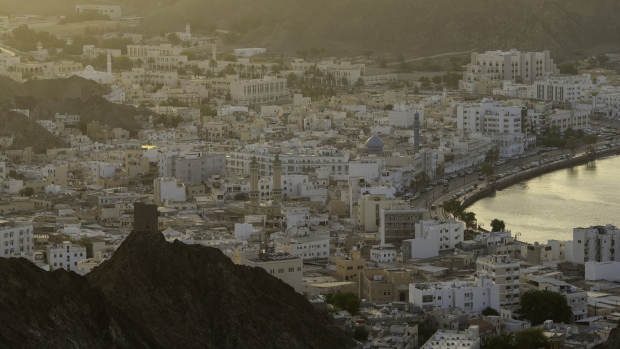 Traditional houses line the Mutrah Corniche on the harbor side in the old city district of Muscat, Oman, on Sunday, May 6, 2018. Being the Switzerland of the Gulf served the country well over the decades, helping the sultanate survive, thrive and make it a key conduit for trade and diplomacy in the turbulent Middle East. , Bloomberg

(Bloomberg) -- Oman will need further measures to keep its budget deficit in check, its Finance Ministry said, after the Gulf nation tapped the international debt market with a $2 billion bond sale.

The shortfall may average 16% of gross domestic product over the next five years, or 5 billion rials ($13 billion) annually in 2021-2025, according to a document. S&P Global Ratings has previoulsy estimated that the budget deficit could hit 18% this year.

Oman has been hammered by the coronavirus pandemic as well as lower crude prices, and has raised the possibility of assistance from its Gulf neighbors. The country is rated junk by all three agencies.

The government was facing increasing pressure to borrow abroad as a widening fiscal shortfall leaves the sovereign underfunded by about 1.3 billion rials to 1.4 billion rials, according to Morgan Stanley.

Oman has taken measures such as reducing spending and plans to impose a 5% value-added tax from next year. It plans to implement developmental projects valued at 371 million rials as part of the effort to redirect resources toward “national priorities,” state-run Oman News Agency reported.

Sultan Haitham Bin Tariq Al Said has also asked officials to set up a system to protect individuals and families most vulnerable to the nation’s budget plan.