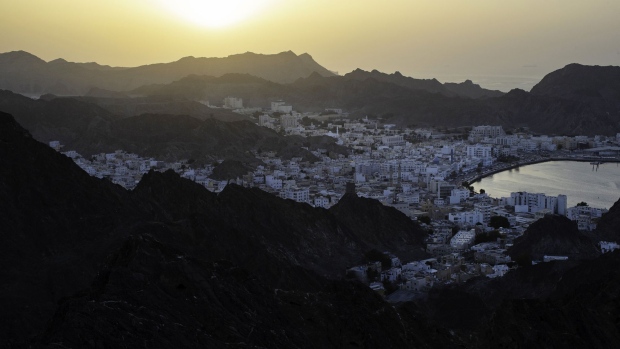 Traditional houses line the Mutrah Corniche on the harbor side in the old city district of Muscat, Oman, on Sunday, May 6, 2018. Being the Switzerland of the Gulf served the country well over the decades, helping the sultanate survive, thrive and make it a key conduit for trade and diplomacy in the turbulent Middle East. Photographer: Christopher Pike/Bloomberg , Bloomberg

Oman has discussed the possibility of financial aid with other Gulf states to help it cope with the economic impact of the coronavirus pandemic and low oil prices, according to two officials in the region and a U.S. government official familiar with the contacts.

The topic was one of several discussed at recent high-level political meetings between Gulf officials, two of the people said. The discussions are preliminary and nothing has been decided, including the scope or type of support that could be on the table, they said, declining to be named because of the sensitive nature of the conversations.

The talks took place at the leadership and foreign ministry level, the people said.

An Omani foreign ministry official said the country is engaged with Gulf neighbors to discuss ways to back up its national program to mitigate the impacts of the drop in oil prices and the coronavirus outbreak, asking not to be named because the discussions haven’t been made public.

The biggest Arab oil exporter outside OPEC, Oman was among the most vulnerable economies in the six-nation Gulf Cooperation Council even before the dual crisis, posing a major challenge for Sultan Haitham Bin Tariq Al Said after he took power in January. The nation’s debt is rated junk by the three major credit assessors.

The sultanate’s long-standing role as a mediator on regional and international issues, including with Iran, and its geographical position on one of the world’s busiest shipping lanes, make its stability important to Gulf states and international allies like the U.S., which signed a deal for better access to the sultanate’s ports last year.

State news agency ONA reported Sultan Haitham met last month with the foreign and finance ministers of Qatar, which is being boycotted by a four-nation Arab bloc led by Saudi Arabia. The talks followed a series of meetings and phone calls between Oman, Kuwait and Qatar.

Other Gulf countries recognize that Oman is in more difficult straits, the U.S. government official said, and are unanimous in not wanting to see the country sink economically.

The U.S. has also discussed potential ways in which it could support Oman, including under its 2009 Free Trade Agreement with the sultanate, and opportunities for U.S. companies, the official said.

Soon after coming to power, Sultan Haitham said fiscal stability was a priority. He has set out plans to cut spending to stabilize public finances, review state companies and last month made a rare decision to reduce salaries of new state employees. As elsewhere in the GCC, Oman has announced plans to inject liquidity into its banking system.

The country is looking at a seventh straight year of fiscal deficits. The gap is expected to widen to 16.9% of gross domestic product this year, according to a forecast by the International Monetary Fund. Oman has also been in preliminary talks with local and international banks to raise as much as $1 billion in loans in the first half of this year, Bloomberg reported in March.