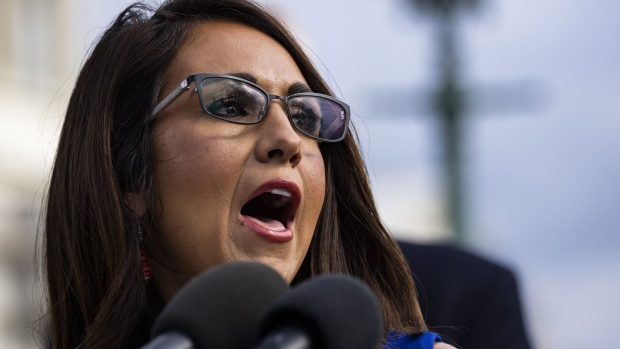 Representative Ilhan Omar, a Democrat from Minnesota, speaks during a press conference near the site of Daunte Wright's death in Brooklyn Center, Minnesota, U.S., on Tuesday, April 20, 2021. The case of the former Minneapolis police officer accused of killing George Floyd went to the jury after Derek Chauvin's defense attorney said the viral video of him kneeling on Floyd's neck and back doesn't tell the entire story. , Bloomberg

Pelosi made a “promise to me that she will take care of this, and I believe her,” Omar, one of three Muslims in Congress, said Sunday on CNN’s “State of the Union.”

Omar said she wants Boebert stripped of her committee assignments over the incident at a town hall event last month, where the Boebert called Omar a member of the “Jihad Squad” and joked that she could be a terrorist.

“I think it’s important for us to say this kind of language, this kind of hate, cannot be condoned by the House of Representatives,” Omar said.

Boebert late last month tweeted an apology to “anyone in the Muslim community I offended with my comment” and offered to call Omar. The phone call between went poorly, with Omar saying her fellow representative had declined to apologize in person, and Boebert claiming that Omar hung up on her.