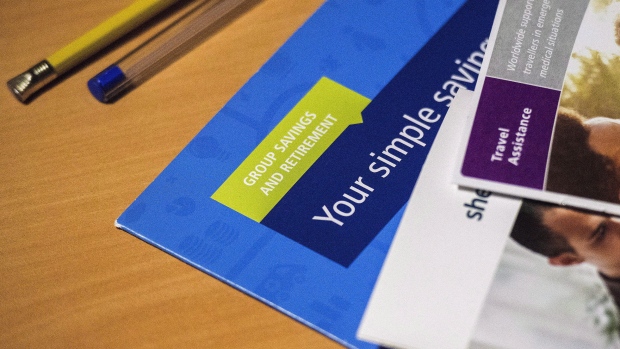 Samples of various employee benefits brochures are shown in a photo illustration, in Toronto on Tuesday, July 17, 2018. THE CANADIAN PRESS/Giordano Ciampini

Ontario Municipal Employees Retirement System, one of Canada’s largest pension funds, reported mid-year results for the first time in an effort to reassure members who are growing increasingly frustrated with its performance.

The pension fund, known as OMERS, gained 8.8 per cent on its investments in the six months through June, pushing assets to $114 billion. That follows a 2.7 per cent loss last year -- its worst since the 2008 global financial crisis -- when the pension fund suffered big pull-backs in its private equity and real estate holdings.

“Our results during the first six months of 2021 were driven by strong returns across our asset classes and by the commitment of our global teams,” Chief Executive Officer Blake Hutcheson said in a report posted to OMERS’ website Friday. “Our diverse portfolio is actively participating in the global economic recovery and our investment strategy remains focused on enhancing value over the long-term.”

In the year ended in June, OMERS returned 18.2 per cent, he said. Last year the pension fund fell far short of its 6.9 per cent return benchmark.

The union representing more than 40 per cent of OMERS’ members did not appear placated, instead renewing calls for an independent review of OMERS, saying the mid-year results aren’t enough to draw attention away from the pension fund’s “systemic underperformance.“

“Just like a single cold day doesn’t mean temperatures aren’t rising, half a year of investment returns tells us very little about the long-term performance of our pension plan,” Fred Hahn, president of the Canadian Union of Public Employees, said in a statement. “Clearly, this is a desperate move to mislead and distract in response to growing concerns about how OMERS operates.”

The union issued a report in May saying OMERS has underperformed its benchmarks, as well as seven other large Canadian pension plans, for at least the past decade.

“We heard from our broad member base who have asked for an update on investment results outside of our annual reporting process,” OMERS spokesman Neil Hrab said by email. “We value transparency and chose to provide this additional mid-year investment update.”

The Police Association of Ontario, another member of OMERS, said it was encouraged by the mid-year release and that the responsibility of the pension fund’s performance lies with its independent board.

“We are confident that this independent board – whose members are nominated by the plan’s primary sponsors, including the PAO – is the proper governance model for OMERS, and is appropriately positioned to determine what, if any, adjustments need to be made to investment personnel and strategies,” PAO’s president Mark Baxter said in a message. “We would encourage OMERS to continue its efforts to share information and build relationships with all plan sponsors, stakeholders and members.”

OMERS’ private equity segment jumped 15.8 per cent in the first half of this year, helped by a recovery in its buyout portfolio, gains in its ventures and growth equity strategies and by the sale of sustainability consultancy ERM Group Inc. to KKR & Co. in May. OMERS sold a majority stake in ERM, with the Alberta Investment Management Corp., to KKR for an undisclosed amount. The deal values ERM at about US$2.7 billion, including debt, people familiar with the matter told Bloomberg at the time.

Last year, OMERS’ private equity portfolio had a negative return of 8.4 per cent. A movie theater chain and a recruiting company in Europe constituted about 90 per cent of the drop, Hutcheson said in February.

Public equities advanced 12.8 per cent in the year through June, earning more than $4 billion for the pension fund, while its real estate bounced back to gain 8.8 per cent, driven by its Oxford Properties’ industrial logistics and residential assets as well as returns in some office sectors, the pension fund said.