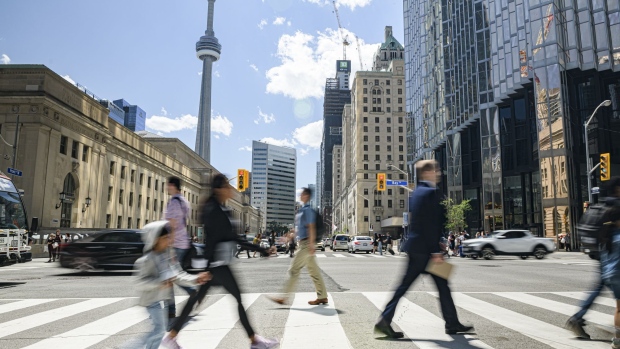 The Ontario Municipal Employees Retirement System posted a 0.4 per cent loss for the first six months of 2022 as a decline in public stocks exceeded the pension fund’s private equity gains.

“The geopolitical environment was incredibly, not only unpredictable, but tragic in so many ways,” Omers Chief Executive Officer Blake Hutcheson said in an interview Thursday. “We have inflation that’s today higher than it’s been in 40 years. Central banks are raising rates quicker than they have since any time since 1994.”

The fund’s public stock holdings dropped 13.2 per cent and the bond portfolio slid 2.5 per cent, it said in a statement, while private equity investments gained 7.7 per cent.

Omers is a net-seller so far this year as the firm realized investments in private equity, infrastructure and real estate -- including selling its interests in GNL Quintero SA, a liquid natural gas terminal in Chile, and in Sony Center in Berlin. The Toronto-based pension plan has also agreed to sell its interest in the holding company that controls Michigan-based Midland Cogeneration Venture.

“Over the last year, we were actually expecting some downturns and making sure we were armed for the next wave of investment opportunities,” Hutcheson said.

Fear of a recession has weighed on deal-making and initial public offerings, crunching valuations and restricting the ability of private equity firms to exit investments. Omers has a strong war chest available to purchase high quality assets, according to Hutcheson.  “We will be able to continue to buy in this cycle but very selectively -- very high quality assets, very much on target with strategy.”