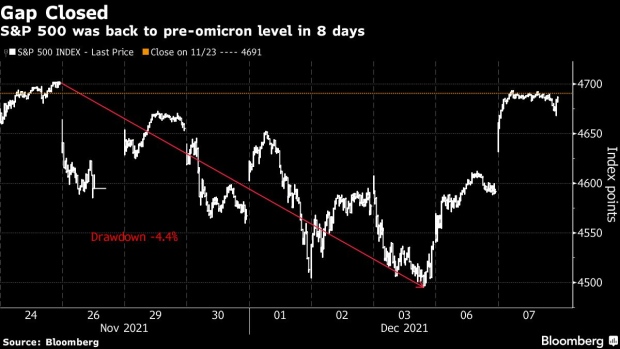 (Bloomberg) -- Less than two weeks after the spread of a new coronavirus variant sent ripples through global stock markets, it’s almost as if omicron never happened.

Equities have quickly bounced back from their recent slump, with the S&P 500 index closing on Tuesday at its highest level since Nov. 24, the last trading day before scientists warned about a potentially more transmissible strain of the virus. In Europe, the benchmark Stoxx 600 has also nearly recovered losses triggered by the omicron variant.

More data from South Africa on Tuesday suggesting symptoms are mild gave a green light for fast-money “to pile back into the buy everything global recovery trade,” Jeffrey Halley, a senior market analyst at Oanda, wrote in a note on Wednesday with the title “Omi-whatever.”

News of the variant initially had a dramatic effect, prompting the biggest one-day drop since February for the S&P 500 index and wiping more than a half-trillion euros in market value from the main European benchmark. Still, strategists remained largely sanguine and -- in the absence of alarming news about the new strain -- investors rushed to buy the dip, with Bank of America Corp. reporting that clients pumped the most money into stocks last week since 2017.

While epidemiologists are still cautious, preliminary evidence suggests that booster shots can offer protection against the new variant. Meanwhile, there’s little appetite for governments on either side of the Atlantic to impose the kind of strict lockdowns seen before vaccines were widely available.

To be sure, even if omicron’s impact on markets proves to be short-lived, the slump seen in the past two weeks serves as a reminder that virus-induced volatility is not over yet. European stocks fell to a session low after a Financial Times report on Wednesday morning said U.K. Prime Minister Boris Johnson was set to announce fresh restrictions in England.

“The most striking feature to me is how the recovery time around these events continues to shorten,” said Carl Dooley, head of European trading at Cowen. “It even surprises the bulls, and has been excruciating for the bears.”