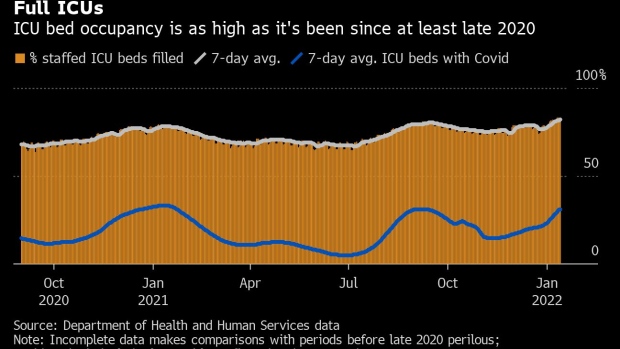 (Bloomberg) -- The crowding wrought by omicron has made going to the hospital more dangerous and likely to be more deadly.

The variant is so contagious that it is deluging hospitals with patients at a moment of severe staff shortages. That combination risks eroding the advantages of omicron’s oft-touted milder symptoms compared to previous versions of Covid.

Kadri was the lead researcher on a landmark study that found early in the pandemic that Covid patients’ risk of dying rose where hospital staff was strained by high caseloads. The study found that one in four deaths could be blamed on surges.

Even with less-severe omicron, “at some point, overcrowding becomes a game of sheer numbers,” he said. “And if the numbers are really high, it’s not rocket science: Variant or no variant, overcrowding probably will continue to kill.”

Among dangerous conditions caused by the staffing crisis, nurses point to a rise in hospital-acquired infections, including Covid; pressure injuries like bedsores; falls among patients; and delays in removing devices like catheters.

Many U.S. medical centers are so full that if a patient at a small community hospital needs to transfer to another facility to get lifesaving dialysis or advanced heart attack care, they may end up fatally stuck for lack of available beds, said Doug White, a professor of critical care at the University of Pittsburgh School of Medicine. That’s what doctors call “dying in place” and it’s on the rise, he said.

Across the country, horrifying stories have been circulating within the medical community of patients found dead in their hospital room bathroom after they took off their oxygen supply to get out of bed. “The alarms went off and there was no one there to take care of them,” White said. “Hospitals are maxed out and near the breaking point.”

Staff shortages affect all patients, not just those suffering with Covid symptoms. “Everyone, whether you have a heart attack or renal failure or gallbladder disease, you and the Covid patients are competing for the same scarce resources,” he said.

Nearly one-fifth of hospitals report that they are critically understaffed, even as their patient loads break records. The labor shortages at some hospitals have grown so dire that military medical staff are on their way to help in six states.

Lifespan, a Rhode Island health system with over 1,200 beds, is among the fortunate institutions to get military help. CEO Tim Babineau has said the system is experiencing “unprecedented” staffing shortages.

While she’s grateful for the at least 17 military workers sent by the Biden administration, Lifespan senior vice president Lisa Abbott said the need for even more staff remains huge.

“It’s a dumpster fire,” she said. “It’s a pandemic wrapped in a labor crisis. Omicron is the accelerant on the dumpster fire.”

A poll released Thursday by the Service Employees International Union found an overwhelming majority among more than 1,500 health-care workers surveyed were concerned about the dangers of staffing shortages.

Among the front-line medical staffers at HCA Healthcare, the country’s largest for-profit chain of hospitals, 89% agreed that “short staffing at my hospital is compromising patient care,” the SEIU said in a press release.

At Lifespan, its flagship Rhode Island Hospital is only able to treat about 590 patients in a facility that has over 700 beds. Some 180 inpatients are currently Covid-positive, more than at any other time during the pandemic.

Lifespan employs 17,000 people, but there are currently more than 2,000 unfilled positions. More than 600 staffers are out sick with Covid.

“We continue to push through,” Abbott said.