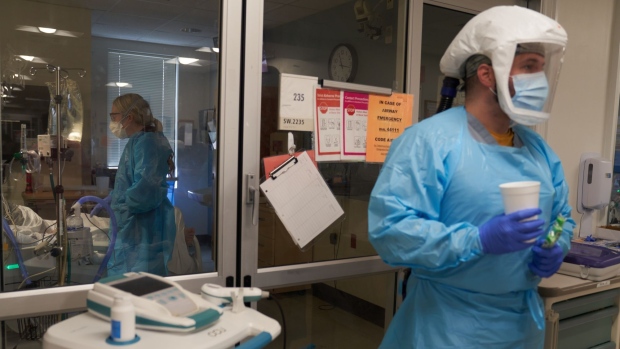 Healthcare workers treat patients on the Covid-19 ICU floor of the University of Massachusetts (UMass) Memorial Hospital in Worcester, Massachusetts, U.S., on Monday, Dec. 27, 2021. On Friday, the Massachusetts Department of Public Health reported 10,040 new confirmed Covid cases, marking the third consecutive day that a record was set for most cases in a single day in the state. , Bloomberg

(Bloomberg) -- The omicron-fueled U.S. surge in Covid-19 cases appears to be triggering a lower rate of hospitalizations than earlier waves, more evidence that the highly transmissible variant leads to milder symptoms than other strains.

The seven-day average of new cases hit 206,577 on Sunday, roughly 18% lower than the all-time high recorded on Jan. 11, according to data from the Centers for Disease Control and Prevention. Meanwhile, hospitalizations rose to a seven-day average of 8,964, only half their earlier peak recorded in January.

Early studies have shown omicron to be about twice as transmissible as delta, the once-dominant version of the coronavirus that now appears to be receding. Because the new variant spreads so easily, the U.S. will likely see continued increases in hospitalizations and deaths, though not as severe as during the delta wave that hit mid-year, said Albert Ko, chair of the department of epidemiology and microbial diseases at the Yale School of Public Health.

“We are seeing exponential increases in cases, and a much lower increase in hospitalizations and deaths,” Ko said in a phone interview. “But we still have 65,000 people who are currently hospitalized because of Covid, and we are having already 1,500 deaths a day.”

Studies out of the U.K., South Africa and Scotland show the risk of hospitalization from omicron is lower than from delta. The variant appears to have a shorter incubation period and cause less serious illness than other versions of the coronavirus, according a study of a cluster of six patients published Tuesday by the CDC.

Even when patients do end up in the hospital with omicron, they appear to spend less time there. However, the increasing numbers of breakthrough infections among vaccinated people may skew hospitalization data, said Jeffrey Morris, professor and director of the biostatistics division at the University of Pennsylvania’s Perelman School of Medicine.

“It appears there is less risk of hospitalized disease across the board, but we have to be a little bit careful about interpreting that,” he said in a phone interview. The rate of hospitalizations and deaths may appear artificially lower because breakthrough cases tend often turn out to be mild, Morris said.