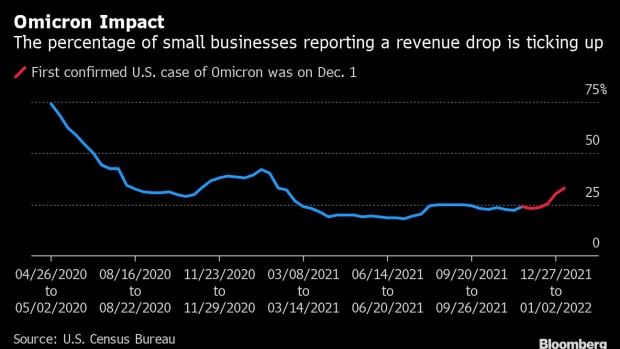 A shopper pays with cash inside a Hospice Thrift Shoppe in Martinez, California, U.S., on Tuesday, Nov. 9, 2021. As brand-name retailers nationwide struggle to fill shelves, a crop of online platforms that trade in secondhand wares are poised to profit handsomely from the global supply chain crunch. Photographer: David Paul Morris/Bloomberg , Bloomberg

(Bloomberg) -- The surge of omicron cases is having a direct hit on U.S. small businesses, which employ almost half of the country’s private-sector workforce.

The share of small firms that reported a decrease in revenue rose to 33% in the week ended Jan. 9, according the U.S. Census Small Business Pulse Survey. That’s the highest since February last year.

Economists anticipate a sharp but short-lived drop in activity due to the fast-spreading omicron. The variant, a seemingly milder form of Covid-19, is so contagious that the sheer volume of sick days has constrained output in many industries.

The impact on activity appears particularly acute in cities such as Detroit, Baltimore and San Antonio, as well as Louisville, Kentucky, and Virginia Beach, Virgina. In these cities, at least 40% of small firms saw a drop in revenue in the Census survey.

In Phoenix and Jacksonville, Florida, the share is closer to 20%.