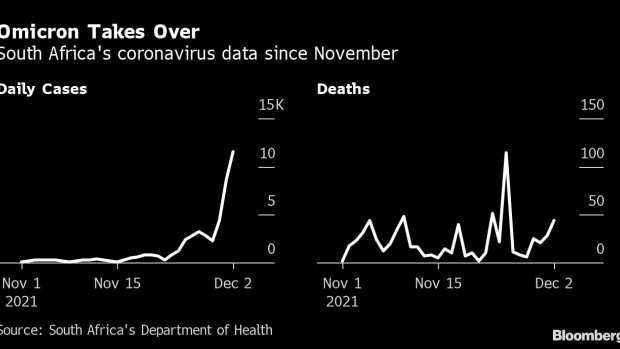 A medical worker administers a nasal swab Covid-19 test at the Dignity Health-GoHealth Urgent Care testing site in the international terminal at San Francisco International Airport (SFO) in San Francisco, California, U.S., on Thursday, Dec. 2, 2021. The first confirmed U.S. case of the omicron variant of the coronavirus was detected in California, the Centers for Disease Control and Prevention said, as the recently detected mutation continues its spread around the world. , Bloomberg

South Africa’s daily number of confirmed Covid-19 cases almost quadrupled since Tuesday as the omicron variant spreads across the country.

UBS Group AG is asking its advisory and deals bankers in Europe, the Middle East and Africa to avoid traveling for business purposes. The precautionary measure applies to employees in the global banking unit amid the uncertainty surrounding the omicron variant, according to a person familiar with the guidance.

Pennsylvania reported one case, a man in his 30s from Philadelphia, city health officials announced. No other details were given.

Maryland reported three cases, all from the Baltimore area, according to a statement from Governor Larry Hogan. Two were in the same household, including a vaccinated person who had traveled to South Africa and an unvaccinated close contact. A third case involved a vaccinated person with no recent travel.

The first case in Nebraska came from an individual who is suspected to have been exposed on a flight from Nigeria on Nov. 23, health officials said. Five more cases were likely exposed through household contact.

None of the infected in either state is hospitalized.

The new variant has also been found in New York, California, Colorado, Hawaii and Minnesota, which said that a resident who had traveled to an anime convention at Manhattan’s Javits Center tested positive.

Rising U.S. omicron cases are guaranteed in the coming days as the highly mutated variant has begun spreading in the community, according to Anthony Fauci, President Joe Biden’s top medical adviser.

“We absolutely have community spread” of the strain in the U.S., Fauci, director of the National Institute of Allergy and Infectious Diseases, said during an appearance on Bloomberg Television’s “Balance of Power with David Westin” on Friday. “There is no way you are not going to see more and more cases.”

The looming question, he said, is how omicron will fare when it has to compete in places like the U.S. where the delta strain is prevalent. “Will it take off and become the dominant variant, or will it get a bit smothered by delta?” Fauci said.

Ireland moved to tighten restrictions, as it seeks to head off a possible renewed surge driven by the omicron variant. The government will close nightclubs from Dec. 7 to Jan. 9. Bars and restaurants will be restricted to table service only while a maximum of four households can mix in private homes.

“The potential for a very serious crisis is obvious” if omicron takes hold, Irish prime minister Micheal Martin said in a national address.

Oslo has uncovered 12 more cases of the omicron variant after a Christmas party in the Norwegian capital, bringing the total to 13, the city government said in a statement on Friday.

More cases are expected with more than 50 people testing positive to Covid-19 after a Scatec ASA event attended by 120 employees on Nov. 26.

Russia suffered the most fatalities of the Covid-19 pandemic in October, according to official data released Friday, adding to what a demographer says is on track to be the deadliest year since World War II.

There were 74,839 deaths associated with the virus in October, a 47% increase over the previous monthly high in July, according to Federal Statistics Service data published late Friday. Russia has had over 575,000 deaths linked to Covid-19 since the start of the pandemic.

The accumulation of mutations in the coronavirus appear to have happened quickly, said Sikhulile Moyo, director for the Botswana Harvard HIV Reference Laboratory and the man who first detected the omicron variant.

Moyo picked up on the omicron variant from samples taken from foreign diplomats who had traveled together. The earliest sample was sequenced on Nov. 23.

South Africa’s daily number of confirmed Covid-19 cases almost quadrupled since Tuesday as the omicron variant spreads across the country.

The country recorded 16,055 infections in the last 24 hours and a positivity rate accelerated to 24.3% from 16.5% on Tuesday, according to the National Institute for Communicable Diseases.

A South African study of infections since the start of the pandemic found that the risk of reinfection from the omicron coronavirus variant is three times higher than for any previous strain.

Mexico reported its first case of the omicron variant infection as the new coronavirus strain spreads across the world, the country’s Deputy Health Minister Hugo Lopez-Gatell announced on Twitter.

The person, 51, recently traveled to South Africa and was hospitalized after testing positive, President Andres Manuel Lopez Obrador said at a press briefing on Friday.

Singapore will require additional testing for travelers and extend travel curbs to more African countries, as it rolls out more measures to allow it time to figure out how to deal with the omicron variant.

The city-state’s infections continue improving with the number of cases found in the community reaching the lowest since Sept. 13, according to the city-state’s Ministry of Health.

Covid-19 infections in the U.S. are at the highest level in two months.

Infections had been rising even before the discovery and arrival of the omicron strain. They dipped last week likely due to lower testing and reporting delays during the Thanksgiving holiday.

The seven-day average of cases in the U.S. was 100,835 as of Thursday, the most since Oct. 6, according to data compiled by Johns Hopkins University and Bloomberg.

The omicron variant is a “cry to have better surveillance around the world to be able to detect virus evolution,” said Maria van Kerkhove, the World Health Organization’s technical lead officer on Covid-19, speaking on a social media forum. Mike Ryan, director of the WHO’s emergencies program, said “perhaps this is a warning shot that we are not sharing vaccines equitably” and the best way to prevent virus evolution would be doing so.

So far there’s no evidence that current vaccines need modification, Ryan also said. The fact that most cases so far are mild is probably because it’s spreading among young people, Ryan said.

Bayern Munich and Barcelona will play their UEFA Champions League soccer tie on Dec. 8 without spectators, after the German state of Bavaria introduced new restrictions on gatherings, ESPN reported.

Bavaria has ordered all matches to be played behind closed doors for the foreseeable future.

Belgium ordered primary schools to extend the Christmas holiday in its third attempt to break a wave of infections that’s among the worst in Europe after experts singled out unvaccinated children as a catalyst of cases in broader society.

Virtual schooling will be required at least half of the time for children 12 years and older starting Monday, Prime Minister Alexander De Croo said. Other new measures include a ban on indoor events with more than 200 participants, and a mandate to wear masks from the age of six.

Scotland could be facing a significant increase in omicron cases in the coming days after the most recent data confirmed that the variant is now circulating in the community.

“Cases are no longer all linked to a single event, but to several different sources,” First Minister Nicola Sturgeon said. “Given the nature of transmission we would expect to see cases rise -- perhaps significantly -- in the days ahead.”

UBS Group AG is asking its advisory and deals bankers in Europe, the Middle East and Africa to avoid traveling for business purposes.

The precautionary measure applies to employees in the global banking unit amid the uncertainty surrounding the omicron variant, according to a person familiar with the guidance. Financial News reported the new earlier on Friday. A spokesperson for UBS declined to comment.

The Swiss government expanded the use of certificates and masks to stem the tide of infections less than a week after citizens backed previous measures in a referendum.

All indoor public events will require proof of vaccination, recovery from previous infection or a negative test, though public institution and event organizers can exclude the unvaccinated, the government said Friday.

Germany has a long battle ahead against the pandemic, a top health official warned, with pressure set to increase on intensive-care units even as infections show signs of peaking.

An apparent plateau in the number of new cases could partly be a result of overwhelmed local health authorities falling behind on testing, Lothar Wieler, the president of the RKI public-health institute, said Friday in Berlin. He urged citizens to reduce social contacts and called for caution in interpreting the latest Covid data.

France said it has detected nine cases of the omicron variant, even as President Emmanuel Macron’s government steps in with fresh promises to support the country’s hard-hit tourism industry.

Cases of the new variant were found in different parts of France and in the overseas territory of La Reunion, and the country is stepping up efforts to identify and isolate them as soon as possible, health authorities said in an emailed statement on Friday.

Moderna says it could know how effective its vaccine is against the new omicron strain in a little more than a week, co-founder Robert Langer said at the Sohn Hearts and Minds Investment Leaders conference in Sydney.

“I certainly expect it will be somewhat effective,” he said, according to a report in AFR.

Pfizer said Thursday that it would have similar information about the vaccine it developed with BioNTech in two to three weeks.