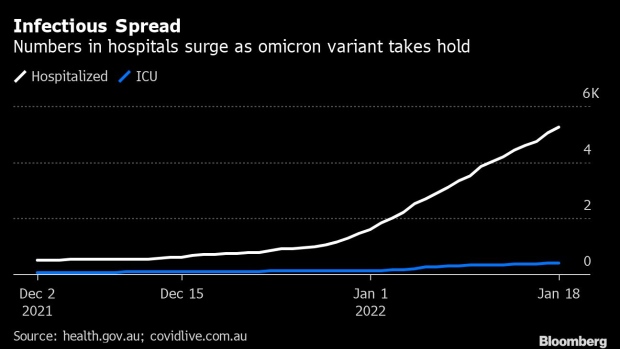 (Bloomberg) -- In Australia’s sun-soaked Queensland state, waterfront resorts are canceling bookings, restaurants are being forced to shut in the holiday season and cruises to the world-heritage listed Great Barrier Reef are on hold.

“We are under a lot of pressure,” said Alaa Armanyous, director of sales and marketing at the Daydream Island Resort and Living Reef in Queensland’s Whitsundays island, famous for its pristine white sand beaches. “Because of Covid, we are struggling to hire and retain talent,” he said, echoing a problem faced around the world.

Just as Australia re-opens after shutting itself off from the world for almost two years, an already serious worker shortage is being compounded by an explosion of Covid-induced absenteeism. While the outbreak is hurting firms, the outsize demand for employees is providing rare leverage for labor over capital and coincides with unions seeking the biggest pay rises in eight years.

The upshot is that Australia’s near-decade of weak wage growth and subdued inflation that has vexed the Reserve Bank could be starting to turn.

The impact is spilling over into financial markets, with stocks in decline after bumper returns last year and bond yields soaring on expectations that faster inflation will hit the economy sooner than previously thought. Consumer confidence has also taken a dive, reinforcing worry among investors.

Labor in Australia was becoming scarce even before omicron. Official data last week showed job vacancies reached a record in the three months through November. Government estimates now show about 10% of workers, including in critical industries, could be out of the workforce due to isolation requirements.

Daydream resort has capped guest occupancy at 70% and closed one of its three restaurants to deal with the labor crunch. Nearby Hamilton Island Holiday Homes has halted all new guest arrivals until Friday as it’s running short of housekeeping staff who are either sick with Covid-19 or in isolation.

The crunch is not restricted to the sunshine state. Many childcare services across Australia have closed their doors while some bars and restaurants in Melbourne and Sydney have temporarily shut or are mulling closing for good.

Labor unions are vowing to push for annual pay rises of at least 3% this year, an outcome not seen since early 2013. Economists too are hopeful the staff squeeze will finally rekindle wage inflation.

Businesses are less sure that the shortages are a prelude to pay gains.

“You can’t ask one person to serve 300 guests even if you pay them a million dollars,” Daydream’s Armanyous said. “It’s not about how much people are earning right now. It’s about how many people we have to do the job.”

While reduced services and closures mean economic growth will likely slow in the near-term, with spending data from Australia’s big banks pointing to subdued private consumption, economists are optimistic the picture will improve once the omicron variant begins to recede.

“The current short term negative shock to spending does not change our forecasts,” said Gareth Aird, the head of Australian Economics at Commonwealth Bank of Australia.

He sees core inflation tracking around the top of the central bank’s 2-3% target for most of this year and wages rising to 3% by end-2022 as unemployment falls.

“These forecasts are consistent with the RBA raising the cash rate in late 2022, based on their reaction function,” said Aird, who reiterated his expectation for a November hike.

Traders are even more optimistic, pricing in a first rate increase by the central bank as early as May. They’ve taken extra encouragement from the Federal Reserve’s preparation to tighten, and the Bank of England having already moved as it struggles with labor shortages and mounting inflation.

While RBA Governor Philip Lowe would be concerned about the short-term damage from the surge in infections, he’s likely be pleased to see demands for higher pay. In the bank’s most recent forecasts, it only saw wages hitting 3% in late 2023.