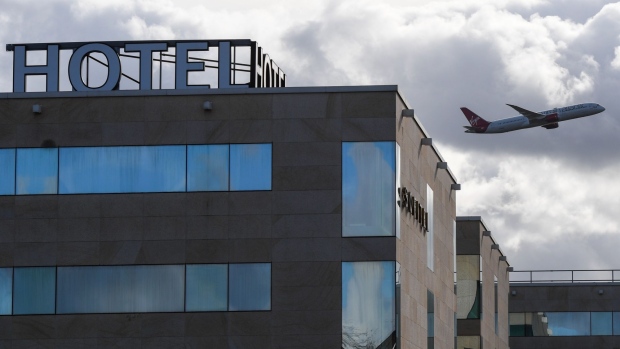 An aircraft flies over the Sofitel at London Heathrow Airport in London, U.K., on Monday, Feb. 15, 2021. Some passengers traveling to the U.K. will face tougher quarantine measures, including enforced stays in hotels, repeated tests, and the threat of fines and even jail. , Bloomberg

The U.K.’s sudden decision to quarantine Britons returning from southern Africa due to the omicron Covid variant has left travelers stranded because rooms are unavailable in the government booking system.

South Africa and nine other nations were placed on the U.K.’s so-called pandemic red list last week, meaning Britons already in those countries must quarantine in designated hotels for 10 days on their return to the U.K. -- at a cost of 2,285 pounds ($3,030) per person or 3,715 per couple.

But travelers are struggling to book rooms due to high demand, leading many to fear they won’t be able to get home in time for Christmas. Boris Johnson’s government is facing accusations it wasn’t prepared for the policy change.

“We are rapidly expanding capacity in light of 10 countries being added to the red list, and expect to have more rooms online this week,” a spokesperson for the U.K. Department of Health told Bloomberg.

Andrea Middleton, who flew to Johannesburg with her husband and teenage daughter last month to visit her sick father, told Bloomberg she has been forced to cancel a flight to the U.K. because they were unable to secure a quarantine hotel booking. Her husband has since tested positive for Covid-19.

“We did not choose to travel to a red list country,” said Middleton, a consultant for an education charity who lives in Hampshire, southeast England. The situation “is causing severe financial, physical and emotional hardship, seemingly because the U.K. government has failed to implement plans after taking a major decision that has impacted many of its own citizens.”

Sally Storr, from Cambridge in southeast England, was also stranded in South Africa with her husband, after having to cancel three flights home because hotels were not available for the same dates. She set up a Facebook group offering support and advice for other Britons struggling to get home, which had more than 80 members as of Friday morning.

“We have finally managed to get a flight and a quarantine package booked but it’s been the most horrendous task,” Storr told the BBC.

“It was obvious to anyone that more quarantine hotel capacity could be needed to manage new strains,” the party’s transport spokeswoman Louise Haigh told Bloomberg. “The bungling has to stop, ministers must act urgently.”