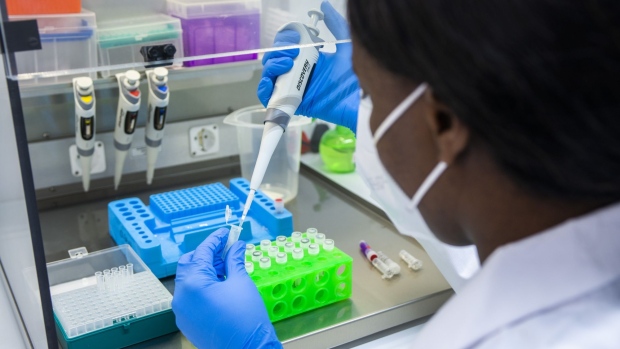 (Bloomberg) -- Omicron’s unusually large number of mutations on the gene that helps the coronavirus spread may provide clues as to how it developed, according to a computational analysis of the variant.

The co-existence of mutations on the so-called S-gene that would normally inhibit the ability of the virus to thrive suggests the changes are instead working to make the variant more effective at spreading, according to a blog post by researchers led by Associate Professor Darren Martin at the University of Cape Town’s Institute of Infectious Disease and Molecular Medicine.

“While individually the mutations might decrease the fitness of any genome in which they occur, collectively they might compensate for one anothers’ deficits to yield a fitter virus genotype,” the researchers wrote in the blog.

Scientists have been rushing to answer the questions posed by the emergence of omicron, which was first sequenced in Botswana and South Africa last month, including how it developed, how transmissible it is, and the severity of illness caused by the strain in comparison with its predecessors, such as delta.

The S-gene allows the formation of the virus’s spike protein, which enables it to enter human cells. The mutations show there “may be cooperation between different parts of the virus,” Martin said in an interview.

According to the researchers some of the hypotheses about its development include:

The World Health Organization and health experts globally have repeatedly warned that Africa’s lack of access to vaccines and the inability of some nations to administer them could lead to further coronavirus mutations.

Just 7% of the continent’s population of 1.2 billion people is fully vaccinated, compared with about 69% in the U.K. The Democratic Republic of Congo, a nation of 100 million people, has immunized just 0.1% of its people and Eritrea is yet to vaccinate any.

In southern Africa the high rate of HIV infections means that millions of people are immunosurpressed.

“We will only be able to distinguish between these hypotheses with more data,” the researchers said. “If one or more SARS-CoV-2 lineages are discovered that are close relatives of omicron then this would support the surveillance failure hypothesis.”

But if similarly divergent variants are discovered in either long-term human infections or in other animal species, these would support the other hypotheses, they said.