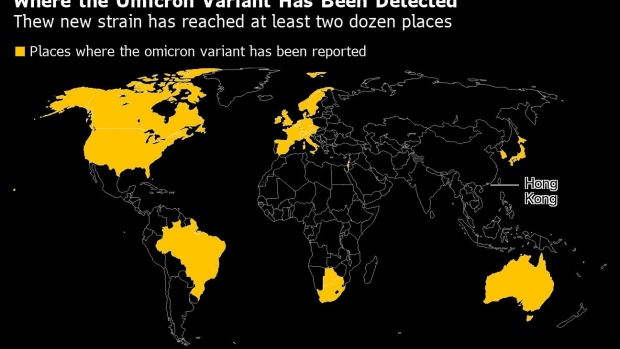 A lab technician uses a pipette dropper during the antigen quantification process of the coronavirus vaccine research at the Valneva SA laboratories in Vienna, Austria, on Thursday, Aug. 6, 2020. The U.K. has signed agreements to buy 90 million doses of vaccines in development by drugmakers including Pfizer Inc., BioNTech SE and Valneva SE, joining countries around the world racing to secure supplies of protection against Covid-19. Photographer: Akos Stiller/Bloomberg , Bloomberg

(Bloomberg) -- The U.S., Ireland, Norway and South Korea reported their first cases of omicron. The chief scientist of the World Health Organization said vaccines will likely protect against severe cases of the new variant.

Daily cases in South Africa almost doubled as omicron took hold there. Restrictions on travel from the region to the U.S. will be temporary, White House medical adviser Anthony Fauci said.

France will require visitors coming from outside the European Union to provide a negative test carried out in the 48 hours before entry. Italy approved Pfizer Inc.’s vaccine for children as young as 5.

Italy’s medicines agency Aifa approved the use of the Covid-19 vaccine from Pfizer Inc. and BioNTech SE for children aged 5-11.

The approval follows that of the European Union’s drugs regulator last month. Two shots will be administered at a three-week interval, and the dosage for kids will be a third of that given to adults and adolescents.

The Biden administration’s restrictions on travel from southern Africa because of the omicron coronavirus variant will be temporary, Anthony Fauci said Wednesday after health officials identified the first U.S. case of the mutated virus.

The travel ban won’t prevent infected people from arriving “but we needed to buy some time to be able to prepare,” Fauci, the director of the National Institute of Allergy and Infectious Diseases, said Wednesday at the White House. He’s also President Joe Biden’s chief medical adviser.

“We look at this as a temporary measure,” he said.

The U.S. Centers for Disease Control and Prevention has confirmed the first U.S. case of omicron as the new variant spreads around the world.

A recent case of Covid-19 in California was caused by the omicron variant, according to the CDC statement. The infected individual was a traveler who returned from South Africa on Nov. 22. The individual was fully vaccinated, had mild symptoms that are improving, is self-quarantining and has been since testing positive. All close contacts have been contacted and have tested negative, according to the CDC.

Omicron, first detected in South Africa, has been found in locations from Australia to Germany and Canada. Researchers are racing to understand the impact of the new strain.

U.S. health officials Wednesday praised a new global agreement to strengthen the world’s readiness for future pandemics. The U.S. will join other nations in a years-long process to negotiate new global rules meant to boost transparency and collaboration in response to health threats.

“We really see this as the end of the beginning,” said Loyce Pace, assistant secretary for global affairs at the U.S. Health and Human Services Department. The agreement, reached at a special session of the World Health Assembly in Geneva, will steer the global community toward a more unified front against future pandemics, HHS Secretary Xavier Becerra said at a briefing.

“All the details have not been worked out, but there’s clear consensus worldwide that we need to do this together,” he said.

Becerra also praised South Africa for quickly alerting the world to the omicron variant while defending U.S. travel restrictions in the region.

New Yorkers who receive a vaccine could win a lifetime fishing and hunting license as the state looks to increase vaccination rates in more rural areas.

The first 2,000 residents to receive the Covid-19 vaccine between Wednesday and Dec. 31 will get a free subscription to the state’s Conservationist magazine, a tree seedling and will be entered into a drawing for a package of prizes tailored to anglers, hunters and other outdoors enthusiasts.

“The vaccine is our best weapon against this pandemic, and every New Yorker needs to get this vaccine to ensure our great state can continue on its path to recovery,” Governor Kathy Hochul said.

Coronavirus cases have been rapidly rising upstate, particularly in Western New York. The seven-day average number of cases per 100,000 people was over 50 in the Finger Lakes, Capital Region, Mohawk Valley, North Country and Southern Tier, according to the most recent data. Western New York, which includes Buffalo, has the highest rate in the state with a seven-day case average of more than 66 per 100,000 residents.

South Africa’s daily number of confirmed Covid-19 cases almost doubled from Tuesday as the omicron variant takes hold in the country. The country recorded 8,561 infections in the last 24 hours and a positivity rate of 16.5% on tests, according to the National Institute for Communicable Diseases.

The omicron variant was found in 74% of the 249 Covid-19 samples that were gene-sequenced in November, the institute said. The delta variant accounted for 22%, compared with 79% in October. Omicron was found in samples in five out of the country’s nine provinces, data from the institute showed.

Slovakia will send hospitality vouchers worth 500 euros ($567) to seniors who are fully inoculated against Covid-19 in a bid to increase one of the European Union’s lowest vaccination rates and prevent future lockdowns.

The cabinet of Prime Minister Eduard Heger approved the bonus for all residents over the age of 60 who have received shots, including the booster, the Finance Ministry said in a statement on Wednesday. The vouchers will be redeemable at hotels, restaurants, hair salons, gyms and cultural venues.

The nation of 5.5 million is in a full lockdown as its rate of new infections on per capita basis is among the worst in the world now.

The Swiss government will decide on reintroducing stricter measures by the end of the week, after detecting three cases of the omicron variant. Measures could include mandatory work from home, reducing the time period a negative Covid-19 test is valid and limiting the number of people allowed at private gatherings. The nation registered more than 10,000 new cases in a single day for the first time this season.

Denmark saw a record number of confirmed cases on Wednesday, as 5,120 people tested positive. The Nordic country, which has detected six cases of the new omicron variant, has reintroduced some restrictions to cope with the recent spike in infections. Masks are mandatory in stores and on public transportation and people are required to present a so-called corona passport proving either vaccination, a recent negative test or immunity through previous contamination to attend public events or eat at restaurants.

France will require travelers coming from outside the European Union to provide a negative test carried out in the 48 hours before entry, even if they are vaccinated, government spokesman Gabriel Attal said on Wednesday. Unvaccinated EU travelers will be asked to provide a test done less than 24 hours before they arrive, and the requirement could be extended to vaccinated travelers by the end of the week, after EU coordination, he said. There are 13 suspected cases of people who could be infected with the omicron variant in France, Attal said.

One case of the omicron Covid-19 variant has been identified in Ireland, the National Public Health Emergency Team said in a statement. The case is associated with travel to a country identified as a risk area and was one of eight samples sequenced.