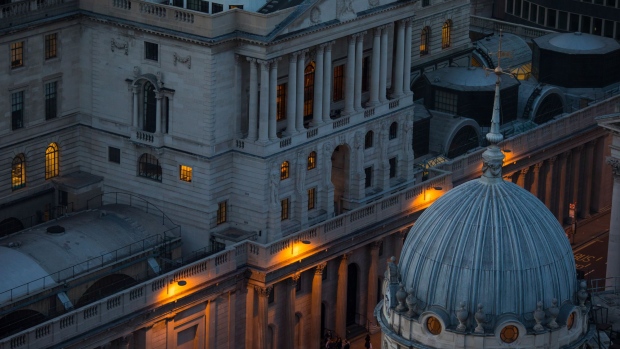 Pedestrians pass the Bank of England in the City of London, U.K., on Tuesday, March 24, 2020. The U.K. is in lockdown after Boris Johnson ordered sweeping measures to stop people leaving their homes "at this moment of national emergency." , Bloomberg

(Bloomberg) -- Diverging responses from Federal Reserve and Bank of England policy makers to the new Covid-19 variant are prompting traders to rethink their playbooks on central-bank tightening on both sides of the Atlantic.

Investors are bolstering bets on a faster pace of Fed rate increases, based on chair Jerome Powell’s comment that accelerated tapering remains on the table despite risks to growth from the omicron strain. That contrasts with the tone from the BOE, which has taken a more cautious approach.

Deputy Governor Ben Broadbent said on Monday that the variant would take time to assess. But the real shift came from Monetary Policy Committee member and uberhawk Michael Saunders, who said last week there were advantages to waiting for further data on the economic impact of omicron before raising rates.

That’s led traders to price in just six basis points of rate increases at the BOE’s meeting next week, paring bets from an all-but-certain 15 basis points just a month ago. By contrast, markets pulled forward the timing for the first Fed hike to June from September after Powell spoke.

The divergence between the two central banks is “stark,” said Gilles Moec, group chief economist at AXA Investment Managers. “The variety of responses, beyond the differences in cyclical conditions facing the central banks, also reflects the lack of hard conclusions so far on the severity of the omicron variant.”

The differences between the two central banks will crystallize next week in their respective rate decisions, with the Fed scheduled for Dec. 15 and the BOE the next day. Fed Vice Chair Richard Clarida, Governor Chris Waller and San Francisco Fed President Mary Daly are among officials that have signaled openness to a faster pace of tapering. For the BOE, it’s looking more and more likely that traders will have to wait until February for the long-anticipated rate hike.

Reports that the omicron variant isn’t fueling a rapid increase in hospitalizations led to some unwinding of the haven bid on Monday. U.S. Treasuries felt the selling pressure, with the yield on 10-year notes ticking up as much as six basis points, compared with just two basis points on the equivalent U.K. note.

The question remains how long this divergence will last. Money markets are still pricing in an aggressive trajectory of hikes from the BOE, with interest rates reaching 1% in November. And despite uncertainty over the outcome of the December meeting, traders are still betting on a larger hike of 25 basis points in February. On the other hand, the Fed still might not choose to raise interest rates any earlier even if the tapering process is completed sooner.

“The Fed desperately needs to give itself the option to hike rates quickly,” wrote Standard Bank’s Steven Barrow, pointing out that it would be difficult for the central bank to raise rates while its bond-buying program continues. “We do not think that the market should take the Fed’s determination to taper faster as a hawkish message but, instead, a desire for optionality on rate policy.”