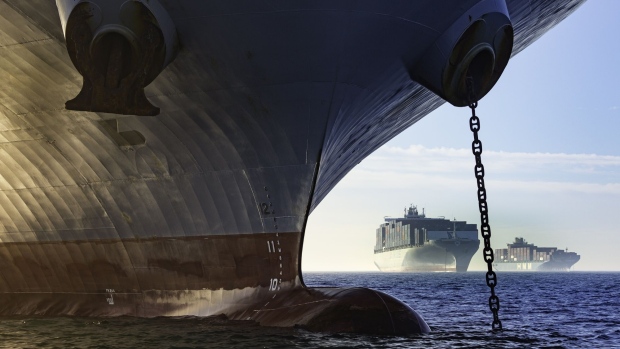 (Bloomberg) -- Omicron is ripping through cargo ships, raising concerns that a surge in cases, coupled with China’s tightened quarantine requirements for vessels, could delay supply chain stabilization for the shipping industry.

Covid outbreaks are hitting ships globally, with cases increasing “exponentially,” said Francesco Gargiulo, CEO of the International Maritime Employers’ Council Ltd., which represents shipping companies. Anglo-Eastern Univan Group, which has an active crew of about 16,000, is seeing infections on five to seven vessels a month compared with only one or two a month last year, the company said. Meanwhile, Wilhelmsen Ship Management Ltd. has had infections on four of its ships since January after less than a dozen vessels were struck with Covid in all of 2021, said Carl Schou, chief executive officer at the ship manager.

“Everyone has had cases onboard,” said Mark O’Neil, the CEO of Columbia Shipmanagement Ltd., which operates a crew pool of about 15,000 and has seen a few of its ships struck down. “You’ll probably see the number of vessels worldwide affected by omicron increasing for sure because it’s so contagious. That’s despite measures and precautions being taken.”

Though shipmanagers say the problem has been manageable so far, a sustained jump in cases adds pressure to supply chains already strained by the pandemic. Ports from Shenzhen to Los Angeles and Rotterdam are contending with long lines of cargo ships, while a shortage of workers and drivers are adding to the snarls. The disruptions are being made worse by strict controls at ports in China, which shows no signs of backing away from its policy of trying to eradicate Covid as the rest of the world resolves to live with it.

While cases are mostly mild among crew, who in most instances must be vaccinated, omicron spreads quickly through ships. That often triggers a quarantine of the vessel for as long as two weeks, although the length of a ship’s quarantine can vary from shipmanagers, ports and countries. Wilhelmsen quarantines ships for two weeks in cases where infections have become widespread.

Chinese ports are especially challenging, with authorities requiring the entire ship to be quarantined if a single seafarer tests positive. Vessels stopping in China must also have been free of Covid for at least three weeks. On top of that, crew changes in China are still near impossible for foreign seafarers.

China’s tightened Covid-19 quarantine requirements for vessels and reduced manpower at ports are adding to delays. It’s taking a week to 10 days longer to deliver iron ore supplies into China versus before the pandemic, charterers and shipowners say.

According to data from project44, average shipment delays from China to the U.S. West Coast increased 114% in 2021 compared with a year earlier. The route to Europe recorded a 172% surge.

“Supply chain disruption persists,” said Bjorn Hojgaard, Anglo-Eastern CEO and chairman of the Hong Kong Shipowners Association. “China’s done a good job in preventing deaths and serious outbreaks but the reality is the international supply chain is suffering. There’s no working around it.”

China’s zero-Covid approach could prove increasingly problematic at ports as more countries switch to living with the virus. Key seafaring countries including India, the Philippines and parts of Europe are being hit by big rises in infections, according to a report this month from the Neptune Declaration coalition of shipowners and charterers.

Last month, about a hundred of Anglo-Eastern’s seafarers tested positive right before embarkation, a jump compared to just a handful in the last quarter in 2021, said Hojgaard.

One bright spot: seafarer vaccinations are rising, helping to keep symptoms mild. Many ship charters are now requiring that seafarers on vessels carrying their cargo be vaccinated, said Schou at Wilhelmsen, which also requires seafarers be inoculated.

“Luckily, no crew have needed to be hospitalized and it’s just influenza-like symptoms that pass in a few days,” he said. “As the world opens up, we’ll get much larger, much faster waves of omicron.”