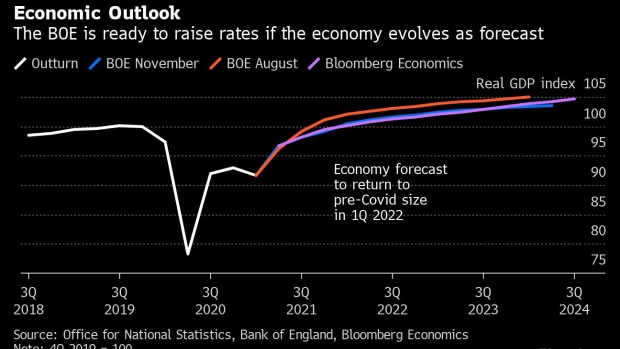 (Bloomberg) -- The emergence of the omicron variant of the coronavirus may add enough uncertainty to the U.K. economic outlook to delay a widely-anticipated interest rate rise this month.

The Bank of England’s decision on Dec. 16 was always set to be a close call, and the new strain of Covid-19 has surpassed the labor market as the key variable likely to guide the speed of the recovery.

With Prime Minister Boris Johnson’s government tightening travel restrictions and reimposing orders to wear masks in public, concern is mounting that fear of the new variant could hit confidence and add to the headwinds facing the economy. That’s drawing attention away from a leap in inflation that’s well above the BOE’s 2% target, which had seemed to leave the institution on course to be the first major central bank to hike rates since the pandemic began.

“The current economy says we are ready for lift off,” said Karen Ward, chief market strategist for Europe at JP Morgan Asset Management. “The question is do they wait to assess the risks? I would say yes. It’s probably right to wait.”

What Our Economists Say ...

“The detection of the omicron variant of Covid-19 in the U.K. has lowered the chances of the Bank of England lifting interest rates in December. The central bank will be watching closely for any science that sheds light on how effective the current vaccines are at preventing severe disease. If the news is positive, it may still be minded to tighten later this month.”

A flare-up in case numbers should not automatically delay a rate rise, though. And the BOE’s decision will hinge on a global debate about how central banks should respond to inflation -- and how much of the gains in consumer prices are transitory.

“If we see over the next two weeks that (omicron has) been present and has been part of the uptick in infection, but the vaccinated are not getting ill, they should proceed with the rate hike,” Ward said.

Steffan Ball, an economist at Goldman Sachs, says omicron has made the decision “a close call,” though he would still move this month. If the government introduces further restrictions or if there is evidence that the vaccines are ineffective against the new variant, “it is possible that the BOE delays lift-off to February.”

Policy makers, led by Andrew Bailey, have already shown themselves willing to wait for even minor uncertainty to dissipate before moving on rates, saying in November they wanted to see how the labor market had coped with the end of the government’s furlough plan before acting. That came even as unofficial data indicated the program had concluded without prompting a spike in unemployment, suggesting a fair degree of risk aversion among officials.

The new Covid-19 strain poses questions that will take longer to answer, like how severe is the virus and are the existing vaccines effective in committing it. If vaccines don’t protect against infection but do protect against severe illness, the U.K. may be able to live with a higher number of cases. Those issues may take weeks to be resolved, clouding the outlook well into the new year.

So far, there’s few enough cases that there’s not much evidence either way. U.K. government officials say that data from South Africa, where the outbreak is biggest, may not be reliable because its population is younger and more immunity has been acquired naturally. In the U.K., most immunity is from vaccines.

Investors are becoming more concerned about the variant, paring bets for a rate rise this month. While strong economic data left financial markets just two weeks ago almost fully pricing in a hike this month, current bets now suggest a 66% chance of a move.

BOE officials have also indicated that they are concerned about the new strain. On Tuesday, Catherine Mann, who voted to hold rates in November, said its emergence may hurt demand and confidence in the U.K., and policy makers need more details on Covid along with a host of other issues before considering higher rates.

Last week, Chief Economist Huw Pill said he was looking for reasons in the data not to move rates but also noted that the risk of another lockdown could blow the recovery off track.

Should uncertainty over the omicron variant of ultimately delay the decision to hike, it wouldn’t be the first time a lack of clarity has caused policymakers to err on the side of caution.

In February 2011, the vote was also on a knife-edge. The BOE’s economic forecasts showed inflation at 4% to 5% for the rest of the year, due to surging global commodity prices, but there were concerns about growth as the U.K. rebounded from the financial crisis. With three policy makers having already backed a hike, Charlie Bean and Paul Tucker, two deputy governors, were the swing voters, BOE officials later said. Had they switched sides, the majority would have been in favor of raising rates from 0.5% to 0.75%.

The recovery in 2010 had been strong until freezing weather and unusually heavy snow struck in December, which brought some construction and parts of the service sector to a halt - a small precursor of the Covid-19 lockdowns. That uncertainty over the state of the recovery was enough, however, to convince both Bean and Tucker to wait for more information. In the end, the rate rise never came as, in 2011, the eurozone sovereign debt crisis intensified.

Focus on the new variant broadens the debate about U.K. monetary policy beyond the strong guidance policy makers delivered last month that a hike will soon be needed to keep inflation in check.

The new variant notwithstanding, that view appears to have gained momentum at other central banks, with Federal Reserve Chair Jerome Powell saying this week officials should consider speeding up how quickly they withdraw policy support in the face of more persistent price gains.

The BOE’s guidance has left economists marking Dec. 14’s labor market report as the key factor that could swing its decision. More clues on whether omicron has disrupted that could emerge in the coming days from speeches by the BOE’s arch hawk Michael Saunders and Deputy Governor Ben Broadbent, considered a key swing voter.

“Risks from the omicron variant are increasing,” S&P Global Ratings economists led by Boris Glass said this week. “We think the BOE will want to wait until its February meeting to reassess.”