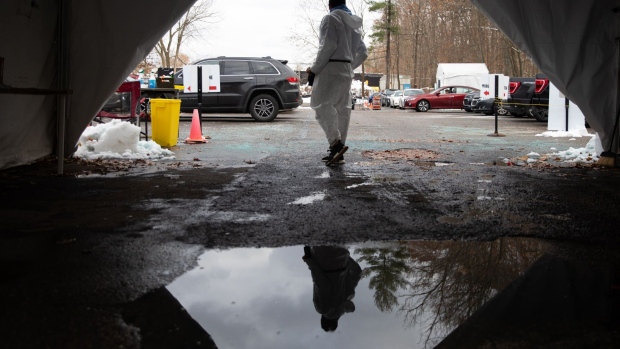 Healthcare workers at a Michigan Health Professionals drive-thru Covid-19 testing site in Farmington Hills, Michigan, U.S., on Monday, Nov. 29, 2021. The Michigan health department reported 25,329 new confirmed cases of COVID-19 over a five-day period Monday, an average of 5,066 per day, bringing Michigan to 1,301,593 confirmed cases since the beginning of the pandemic, according to the Detroit Free Press. Photographer: Emily Elconin/Bloomberg , Bloomberg

(Bloomberg) -- Covid-19’s omicron variant is posing the first major test of the U.S.’s expanded system for monitoring mutations -- a key line of defense against potentially dangerous new versions of the virus that might spread quickly, evade vaccines or kill more infected people.

The U.S. is now doing far more sequencing than it was at the start of this year, when new variants of the virus first became a fixture of global concern. Public health laboratories are conducting as many as 20,000 full-genome viral analyses a week, four times the number from a year earlier, according to Kelly Wroblewski, director of infectious diseases for the Association of Public Health Laboratories. When combined with other sequencing efforts, including those of the Centers for Disease Control and Prevention, the U.S. sequenced more than 90,000 Covid samples in the last week alone.

“We have the capacity and systems in place now so that when something of interest like omicron pops up, we can pivot quickly,” she said. “We are in a very, very good place.”

Frequent sequencing of Covid-19 samples helped scientists in South Africa quickly identify omicron, which could have been circulating far earlier under the radar of countries with less active monitoring. After the U.S. fell behind in establishing a robust nationwide viral surveillance program in the pandemic’s first year, the Biden administration pledged $1.7 billion in new funding to help fix the issue.

Still, U.S. efforts trail behind some other nations. Over the past three months, the U.S. has sequenced and shared about 5.5% of its Covid cases, according to data from GISAID, a global portal where researchers share new genomes. Meanwhile, the U.K. sequences and shares nearly 14% of cases.

Disbursement and use of the administration’s sequencing funds isn’t going fast enough, said Rick Bright, chief executive officer of the Pandemic Prevention Institute at the Rockefeller Foundation. Sequencing centers across the country should also be coordinating more closely, he said.

“Given the fact that we’re still in the midst of a pandemic -- the worst public health crisis in our lifetime -- those funds should start flowing much more quickly than they are now,” he said. “They also should be used to stitch together more of a community that can contribute to genomic surveillance instead of being focused still on the public health labs that are affiliated with the CDC and our government system.”

The U.S.’s fragmented health care system has been an impediment to building a comprehensive sequencing program. A scattered constellation of academic, commercial and public health labs report to 50 different state health departments in 50 different states.

Some states still lag far behind others, making them especially vulnerable. Oklahoma, for example, is sequencing less than 1% of its total Covid cases, while Wyoming and Vermont are each sequencing more than 20%, according to the CDC.

It wasn’t until the emergence of the alpha variant that there was broad recognition in the U.S. of a need for a robust viral surveillance system, Wroblewski said. With so many different entities contributing to sequencing efforts, there are still improvements to that system to be made.

“Creating a system that is more top-down will require some sustained investment,” she said.

While the U.S. is sequencing a much higher percentage of Covid samples than earlier, the bigger issue may be that not enough virus testing is done in the first place, said Jeremy Kamil, a virologist at Louisiana State University Health Sciences Center Shreveport.

“The right investments haven’t been made,” he said. “We are not going to find it as quickly as we could. We don’t have the testing at ports that other countries do, we don’t swab people coming off planes and we should be, at least on a voluntary basis.”

Indeed, while the U.S. is banning foreign travelers from southern African countries, it isn’t testing for omicron infection among those who do come from the area. Such gaps could leave a hole in national security at a time when there are more questions than answers about the latest variant of the virus to raise concerns.

Still, the U.S. is in a far better place than it was six months ago. Along with increased sequencing capacity, the federal funding has helped to better balance the burden of work between commercial, academic, and public health labs, said Phil Febbo, chief medical officer of DNA sequencing at Illumina Inc.

“We are unlikely to be caught unaware by emerging variants, although there remains a risk of a few blind spots,” he said.

At the Broad Institute in Cambridge, Massachusetts, a major research center that sequences about 4,000 tests each week, scientists are very much on the lookout for the omicron variant, but have yet to detect any sign of it locally.

“The search lights are full on,” said Daniel Park, a senior group leader of viral computational genomics at the Broad. “I can say we’re definitely looking, quite carefully, and don’t have anything notable to report yet.”

With amped up viral surveillance now in place, Park said that the public can expect to be informed “quite quickly” when omicron does make landfall in the US.