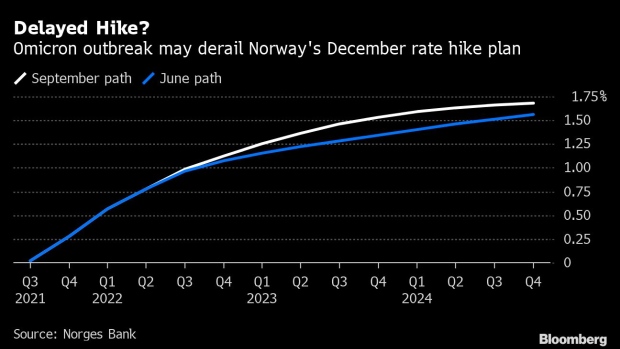 (Bloomberg) -- Norway’s plan to raise interest rates next week has been thrust into doubt by the emergence of the omicron variant of Covid-19 and government efforts to curb its spread.

As recently as last month, analysts at Nordea said that only “Armageddon” could prevent the central bank from lifting benchmark borrowing costs to 0.5% in December as the economic recovery exceeds expectations thanks to a rebound in consumption and stimulus from the Nordic country’s $1.4 trillion sovereign wealth fund.

Now, however, limits on alcohol sales and stricter face-mask rules threaten to weigh on business activity -- complicating the task for rate-setters.

“It’s precisely the authorities’ measures against the omicron variant that may be decisive for Norges Bank,” Marius Gonsholt Hov, an economist at Svenska Handelsbanken, said Wednesday in an emailed report to clients. While he still leans toward a rate rise, “there’s strong doubt and we must also be prepared for more negative news.”

It’s not just next month: The central bank, which lifted rates in September for the first time since the pandemic, had flagged at least three more increases in 2022.

But those plans were built on assumptions there wouldn’t be another virus flare-up this year. Recent developments question the whole timeline.