Qantas Tests Whether Passengers Can Handle a 20-Hour Flight

At almost 20 hours, the unprecedented journey is set to be the world’s longest flight. It’s a key test run as Qantas prepares to start direct commercial services connecting Sydney with New York and London as soon as 2022.

As part of research aimed at reducing jet lag, passengers on board will effectively switch to Sydney time as soon as they leave New York late Friday. Rather than following the standard practice of serving food and dimming the lights after takeoff, Qantas plans to keep everyone awake for six hours. They’ll be helped by food containing hot peppers and spices.

“The passenger research will test alternatives to how airlines have managed in-flight service for decades,” Qantas Chief Executive Officer Alan Joyce said. The industry’s traditional schedule may not be the best way to switch the body clock to the destination’s time zone, he said. 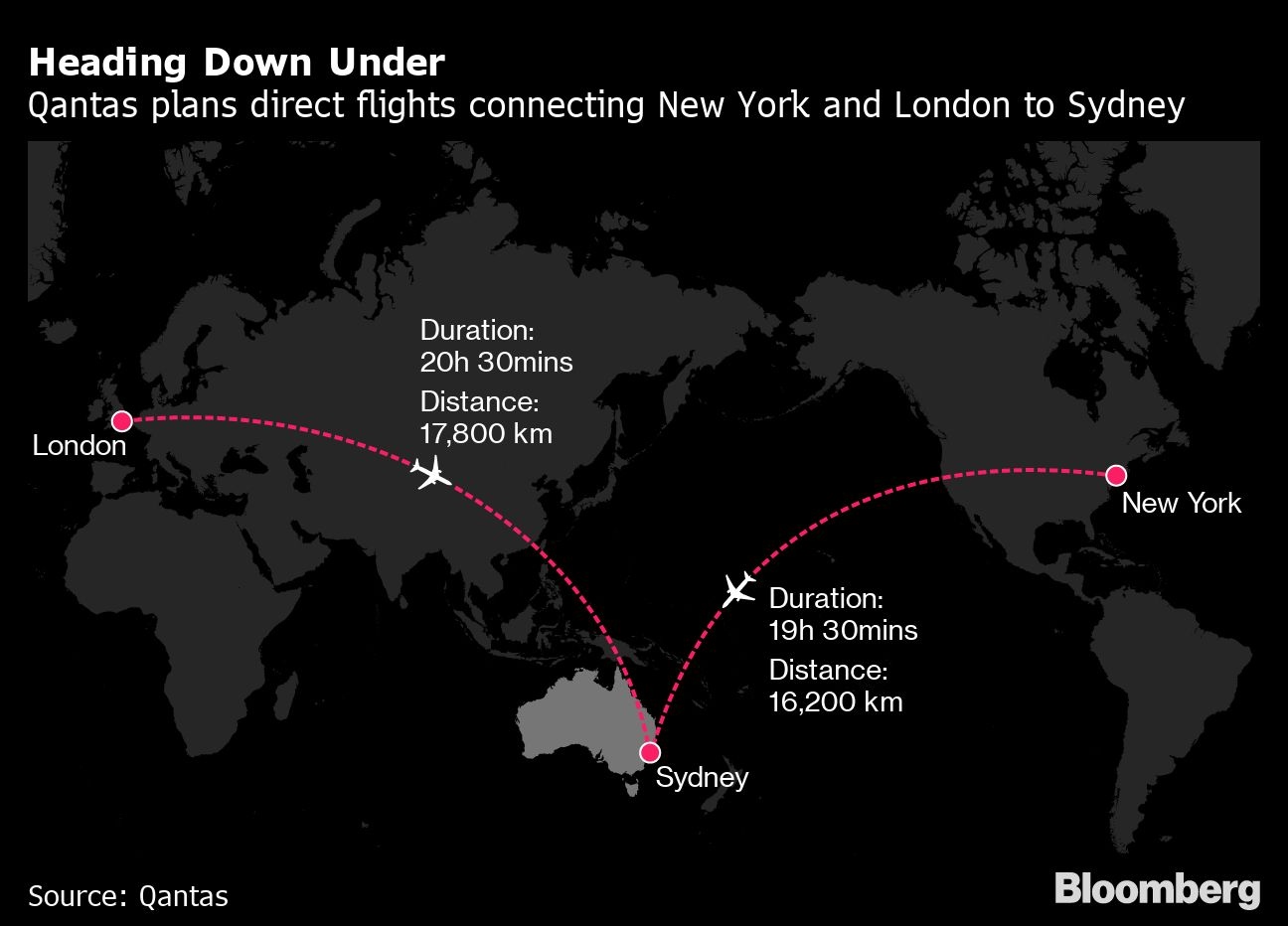 Qantas’s Boeing Co. 787 Dreamliner will carry only about 50 passengers and crew to give the plane the range to reach Sydney on Sunday without stopping. Here are some key features of research that will be carried out on board.

Six Qantas frequent flyers will follow a pre-planned schedule for eating, drinking, sleeping and moving
They’ll keep a daily log before and during the flight, as well as for two weeks afterward to gauge how they feel
Pilots will wear brain-monitoring equipment to assess their alertness and will provide urine samples to track melatonin levels (a natural sleep-inducing chemical)

Airlines have greater opportunity to travel long distances as advances in aviation lead to lighter aircraft that are more aerodynamic and fuel efficient. Other ultra-long-haulers include Singapore Airlines Ltd., which has resumed nonstop flights from its home base to New York, and Qatar Airways, which offers an 18-hour direct trip from Auckland to Doha.

There’s a market for premium, nonstop flights between Sydney and New York, Joyce said in an interview on Bloomberg TV. He said Qantas fills its daily services from Australia’s east coast to Los Angeles, which then go onto New York. The airline also charges a premium for its 17-hour direct connection between Perth and London, and those planes are 95% full, he said.

“We know the demand’s there,” Joyce said, referring to the Sydney-New York route.

The Sydney-bound plane, which leaves New York late on Friday, should land on Sunday with about 90 minutes of fuel in the tanks, Sean Golding, the aircraft’s captain, said at a pre-flight briefing in New York on Thursday. The brand-new jet will take off with about 101 tons of fuel, he said.

The research on the Qantas passengers is designed to answer three central questions:

For one of them, logistics worker Greig Roberts, taking the trip will be a chance to learn how to deal better with jet lag, which can knock him about for days after a long flight.

“That is the appeal for me,” he said in an interview at the briefing. “If you can arrive feeling fresh and buzzing, that can be very productive.”

--With assistance from Alex Millson.