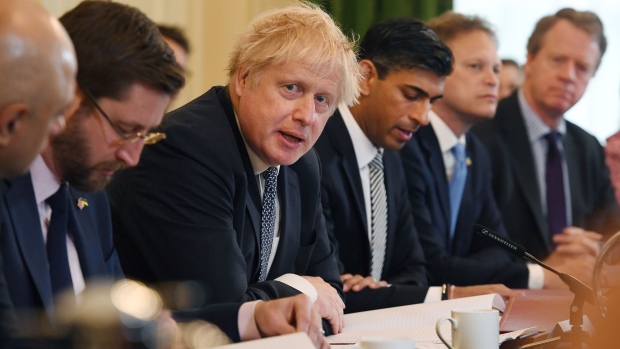 Boris Johnson speaks during a cabinet meeting in London. , Bloomberg

(Bloomberg) -- Boris Johnson famously led the campaign to take the UK out of the European Union. But on the six-year anniversary of the vote, his team struggled to come up with ways in which the country is better off.

“We’re committed to realizing the benefits of Brexit,” the prime minister’s spokesman, Jamie Davies, told reporters on Thursday, when asked to identify the biggest gains from divorcing the UK’s biggest trading partner. He pointed to new trade deals, as well as a “bill of rights” and a plan to repeal laws inherited from the EU -- just announced on Wednesday -- as examples.

Those slim pickings are part of the reason Johnson is in such political trouble -- alongside various scandals -- as even some Brexit supporters have become disillusioned with how the project is turning out.

Boris Johnson Clings to Power, But Question Is for How Long

Take those vaunted trade deals, the bulk of which are simply roll-over, like-for-like agreements designed to maintain what the UK already had as an EU member. Even the new pacts -- including with Australia and New Zealand, plus ongoing negotiations with India -- are expected to have a marginal impact on the size of the UK economy.

At the same time, the government’s independent budget watchdog, the Office for Budget Responsibility, says the UK is taking a 4% hit to GDP from Brexit.

Meanwhile the bill of rights referred to by Davies is unrelated to Brexit. It will allow the UK to ignore rulings from the European Court of Human Rights -- but the ECHR is a separate institution from the EU.

The UK’s plan to repeal EU laws is still in its infancy, and the government is asking the public to use a new website to identify which rules they want to scrap. Doing things differently from the EU has been mooted as a potential upside of Brexit, but it also carries risks: If regulations in the UK and EU are different, companies may have to make products to different specifications to access both markets, and services firms may face extra red tape.

Just a Year of Brexit Has Thumped U.K.’s Economy and Businesses

Davies declined to comment on whether Brexit had left British firms facing more or fewer trade barriers. Quitting the single market and customs union means they have to file additional paperwork when sending goods to the EU.

The government’s aim is to “remove as many trade barriers as possible,” Davies said. But he cited the UK’s efforts to reduce the customs burden on goods crossing the Irish Sea to Northern Ireland -- a burden that exists because of the terms of the divorce deal Johnson signed with the EU.

A bill allowing British ministers to rip up the Northern Ireland Protocol, the portion of the Brexit deal setting out trading rules for that region, is due for debate in Parliament on Monday.

Johnson frequently talks up post-Brexit opportunities for Britain to trade with other nations, and moments after Davies’s briefing, the premier gave a speech at the Commonwealth Heads of Government Meeting in Kigali.

In typical fashion, he included a pop at the EU.

“I remember the UK helped to found the European free trade area many years ago, which then got taken over by something called the European Union,” he said. “I don’t necessarily advise, by the way, that you turn the Africa free trade area into a single currency -- but I leave that wholly to you.”

As Britons emerge from the pandemic to a cost-of-living crisis that many economists say Brexit is not helping, the risk for Johnson is that his trademark jokes and bullishness are falling increasingly flat.