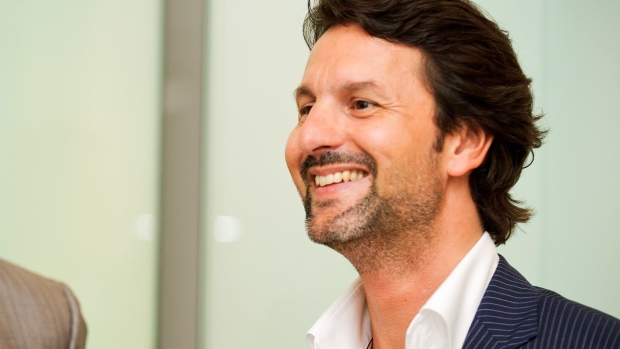 (Bloomberg) -- At Bloomberg Pursuits, we love to travel. And when we can again, we want to make sure we’re doing it right. So we’re talking to globe-trotters in all of our luxury fields—food, wine, fashion, cars, real estate—to learn about their high-end hacks, time-saving tips, and off-the-wall experiences. These are the Distinguished Travel Hackers.

A bona fide watch world wunderkind, Max Buesser snagged the role of managing director of Harry Winston Rare Timepieces at just 31 years old and spent seven years establishing its haute horlogerie credentials. In 2005, he left Winston to start his own firm, Maximilian Büsser and Friends (MB&F), where he can indulge his creative whimsy unfettered.

MB&F, known for its relentless innovation in watchmaking, will release its 20th timepiece in just 16 years in late 2021. Its latest, Orb, a futuristic clock made in collaboration with L'Epée 1839, launches this week during Geneva Watch Days and is available in five colors, each in a 50-piece limited edition. Buesser splits his time between MB&F's headquarters in Geneva, and Dubai, where his family is based: a wife and two daughters, aged 4 and 8. In a typical year before the pandemic, he logged from 200,000 to 300,000 miles each year. He is loyal to Emirates. “Before Covid, I think it served about 16 cities direct—the amount of flights was one reason, for me,” he says. “And they’re always on time. Maybe once or twice, I've had a half-hour delay.”

His Dubai base has proven convenient over the past year, given that the entry rules enacted as a result of the pandemic still bar those from Europe from directly entering the U.S. "If you come from Dubai, though, you have no problem," he explains, since noncitizens and permanent residents who have spent at least 14 days outside Europe can legally enter the U.S.

Here are his travel hacks.  This almost weightless keepsake is his way of connecting with family wherever he may be.

I’m a creator, and it’s incredibly important for me as a father to help my daughters remain creative, too. They know it makes me proud, so they often do drawings for me. Sometimes before I travel, sometimes when I come back, I’ll have one waiting on my pillow. So to encourage that, I started taking one of those drawings with me, and taking a selfie with it in front of wherever I was: if I’m in Taiwan, you can see Taipei 101, or if I’m in Hong Kong, you could see the bay. My wife said it made them so happy, so it became sort of a ritual. It basically means “You have never left my heart. You’re always with me.” It is as if they are accompanying me a little.

The legacy of construction in Dubai has brought workers from across the world —and with them, their food.

The first thing I’d advise anybody who goes to Dubai is to book a food tour with Frying Pan Adventures. It’s run by two Indian food bloggers who were born in Dubai and who have pinpointed all sorts of little restaurants and food stores in the old Dubai—you’ll try stuffed falafels at one store, or a vegetarian thali in an Indian laborers’ restaurant. The best chicken tikka might be in another one, and then they’ll take you to have jalebi in another restaurant. Each time, not only do they take you to the food, but they also tell you the story of Dubai through it. It’s not at all the Dubai you'd expect. You don’t always need to book a hotel room, even on a long-haul business trip.

Jean Claude Biver [the former chief executive officer of Tag Heuer] is someone very famous in our industry who’s just retired. I’ve always planned when I go to the U.S. to pack in four or five days’ [of meetings]—or in Asia, a week. But he takes a flight, does a meeting in the afternoon, and flies right out. I remember there was a Hodinkee event for their 10th anniversary, and he flew in from Zurich to New York, arriving at 3 p.m. He did his talk, and at 8 p.m. he took his flight back to Zurich. He said: “It’s a mindset. I work all day on the day flight, then I can sleep for three or four hours on the flight back. It's all I need, and the next morning I’m back in the office."

Another friend of mine in Dubai—an incredibly successful Swiss entrepreneur with a very big tech company who goes to Silicon Valley all the time—he does that also. He'll go for one or two meetings and fly out straightaway. Forget sleeping pills,  and get your hands on this French pharmaceutical instead.

Celestamine is a French antihistamine pill which keeps you much fresher on waking up than sleeping pills. It allows me to sleep in planes or counter jet lag without being totally zonked. Since I was 20 or 25, I have suffered from chronic sinus infections—it’s a thing most of us frequent travelers suffer from, because the dry air on planes irritates our sinuses. I used to treat them with antibiotics five or six times a year, until one of my doctors said, “Try this antihistamine. It will help.” And it did. But I noticed that, when I take it, I basically just fall asleep. So I started to take it on planes, and I would fall asleep immediately but wake up completely clear. It’s on prescription, and you just have to make sure not to take one that is marked as “non-drowsy”; that has ephedrine in it, so it’d be like drinking a Red Bull. Splurge on a luxury hotel at an iconic world site, and your VIP status will likely confer unexpected bonuses when it comes to sightseeing.

One of my most amazing holidays was at Amansara in Siem Reap, Cambodia. Everything [else] in Siem Reap looks like a Cambodian temple, but it was the summer house of the royal family, and built by a French architect who was incredibly inspired by Le Corbusier. The car that comes to get you at the airport is a 1958 Mercedes.

But the most amazing experience was when we went to go visit Angkor Wat. They told us, “We will leave at 5 a.m.,” so we got up at 4:15 a.m. or whatever, and they prepared wonderful picnic baskets for us. They brought us in a 1950s Jeep Willys to the middle of the jungle. There wasn’t a soul around. We had no idea it only opens [to the public] at 9 a.m. He takes us to the top floor of the biggest temple in the history of humanity, and leaves us there for three hours, alone, to see the sunrise. I’ve got goosebumps even talking about it. It’s a reminder that a room might seem crazy expensive, but it can be priceless, too. The over-the-top amenities at Singapore’s Changi Airport are well chronicled, but Buesser loves it for an entirely different reason.

The watch mecca today has shifted very much from Geneva to Singapore. The most interesting pieces and some of the most knowledgeable retailers are in Singapore now, for the last 10 to 15 years. One day, I was flying out of Singapore, and I was incredibly late, plus I had papers for temporary importation [of goods] in our case. I needed to have them stamped, and I thought: “I’m dead. I’m never going to be able to get that flight.” But at Changi, you can go from check-in to boarding the plane in just 10 or 12 minutes. It’s insane —so incredibly well thought out and efficient, like everything that is Singaporean. One place it’s okay to stand out as a tourist—and enjoy the culture shock.

My wife and I went to Japan for 10 days three years ago, and they were mind-blowing. It’s the last country in the world where you have total culture shock nonstop [as a Westerner]. And you can blunder around, and feel completely inadequate and awkward, and still be OK. In South America, you have to be super careful, but Japan? Japan is safer than Switzerland.