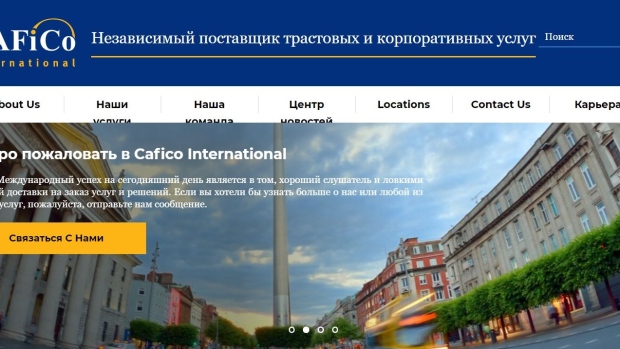 The Dublin skyline is seen from the Guinness brewery, owned by Diageo Plc, in Dublin, Ireland, on Thursday, Nov. 24, 2016. Irish ministers and executives are closely monitoring economic and market developments in the U.K. because the country is Ireland’s largest trading partner along with the U.S. , Bloomberg

(Bloomberg) -- On a Dublin backstreet, behind a Georgian townhouse where the Irish Red Cross is raising funds to support Ukraine, a once-thriving hub of Russian finance is falling apart.

Here, a little-known firm quietly helped to keep Russia’s global money engine ticking over in recent years. Cafico International set up shell companies for some of the country’s biggest businesses, providing directors and accounts, helping them to sell bonds and raise billions of dollars.

If Cafico’s services were discreet, its clients were anything but: corporations intertwined with President Vladimir Putin’s regime including VTB Bank and Russian Railways JSC, industrial powerhouses linked to oligarchs such as Oleg Deripaska and Roman Abramovich, and lenders systemic to the country’s economy like Sovcombank PJSC and Credit Bank of Moscow.

Along with fellow corporate-service providers such as Amsterdam-based TMF Group and Hong Kong-based Vistra Group, Cafico is part of a network of invisible middlemen that helped Russian companies borrow at least $145 billion over the past decade, including after Russian forces invaded Crimea in 2014. There’s about $65 billion outstanding, one third of which is linked to Cafico, according to a Bloomberg review of financial and regulatory filings.

The numbers suggest that while Russia’s tycoons were known for splashing out on luxury real-estate in London and parties in Monaco, some of the vital mechanics of their empires was happening in a non-descript office building in Dublin.

But the full-scale invasion of Ukraine has now upended the industry. Cafico’s customers have fallen under international sanctions, the bonds they and others arranged have plunged to pennies on the dollar, and banks are delaying, even blocking, payments as they try to stay on the right side of restrictions.

With Russian business dealings now stigmatized, there’s also a spotlight on Ireland’s role facilitating the business. The issue has been raised in parliament debates, with some lawmakers referring to “dirty money” in Ireland, which has long battled accusations it’s a corporate tax haven.

For their part, corporate-service providers are trying to extricate themselves and dump the Russian clients they once courted, something that’s easier said than done. The firms have expressed horror at the war -- Cafico says it’s counter to its values -- but critics of the industry have little sympathy.

“Where were these values after the invasion of Crimea,” said Mairead Farrell, an Irish lawmaker with the opposition Sinn Fein party, who said Cafico had served a “disproportionate number” of Russian clients. “It’s too little, too late.”

Russian companies have been using empty shells for just over two decades to raise funds, according to data compiled by Bloomberg, and the business barely skipped a beat after the 2014 Crimea invasion. By locating in Ireland, for example, they take advantage of regulatory regimes that international investors are more familiar with, while also benefiting from special tax breaks.

The standalone entities -- known as special purpose vehicles, or SPVs -- can be used to issue securities called loan-participation notes that can be listed on local exchanges and sold to international investors, with the proceeds funneled back to their sponsors.

And for the companies that set up such services, the business is a money-spinner. They’ll often have tens, if not hundreds, of SPVs on their books. Every entity will pay up to 20,000 euros ($21,000) in fees every year, estimates James Stewart, a professor in finance at Trinity College Dublin who has studied the sector.

Russian companies have been huge users of SPVs and the LPN structure, the data analyzed by Bloomberg show. They raised more than twice as much in foreign currency through that process than other types of bonds over the past decade.

According to Angela Gallo, a finance professor at City University of London, the figures suggest that they’ve become “the predominant type of access to foreign currency for Russian firms.”

“SPVs are the infrastructure that allow capital to flow in and out of Russia,” she said. “Russian companies need to access global capital markets to raise funds and global investors need risks to improve their yields. Think of corporate service providers as bridges that allow parallel capital flows.”

Rodney O’Rourke, an Irish lawyer who controls Cafico, did not respond to phone calls and emails seeking comment. Yolanda Kelly, director of finance, declined to comment beyond a company statement in March.

Meanwhile, firms that were hired to validate the shell companies’ accounts have started abandoning ship, with at least seven Irish-based SPVs receiving resignation letters since the invasion. KPMG, EisnerAmper, Mazars and Grant Thornton have walked away, with Grant Thornton citing concerns about falling foul of sanctions.

European regulators were in the dark for years about the size of the SPV industry and who was behind transactions. When officials at the Central Bank of Ireland probed the sector in 2015, they discovered hundreds of opaque entities holding combined assets bigger than the country’s gross domestic product. Irish-based SPVs still hold about 37 billion euros of Russia-issued assets.

Even before the war, critics questioned whether they were obscuring risks and wrongdoing.

Credit Bank of Moscow used a Cafico vehicle to borrow billions of dollars despite being a close business partner of sanctioned state-owned oil giant Rosneft. Vneshprombank Ltd. borrowed $225 million through a Cafico SPV only to collapse in 2016 amid allegations that executives had pilfered its assets and falsified accounts. Tatfondbank PJSC, one of the country’s biggest regional banks, used an SPV arranged by TMF to sell $60 million of bonds just weeks before it imploded under a cloud of allegations.

Founded by O’Rourke in 2012, Cafico is barely known within Dublin business circles, while its Twitter account has fewer than 100 followers. Yet it’s actively courted Russian business for years, even running a Russian-language page at one point.

The industry has attracted some deep-pocketed investors. U.K. private-equity firm CVC Capital Partners bought TMF for 1.8 billion euros in 2017. Warburg Pincus mulled a potential bid for Vistra late last year that would have valued it at up to $5 billion.

Cafico is smaller but still lucrative. The firm had 4.5 million euros in shareholders’ funds at the end of 2020.

But this steady income stream has now morphed into a nightmare.

“Cafico has terminated and continues to terminate the provision of services to all Russia-linked clients,” it said in early March.

At TMF, chief executive Mark Weil says the company did business with Russia over the past decade as it was “perfectly legal.” Now he wants to dump most of those customers and is bracing for a multi-million dollar hit mainly due to “walking away from revenue.”

Last month, a Dublin-based SPV called PhosAgro Bond Funding DAC stated that it hadn’t made an interest payment to bondholders. The entity borrowed $1.5 billion through bond sales in recent years and dispatched the funds to PhosAgro PJSC, the Russian fertilizer giant controlled by sanctioned oligarch Andrey Guryev, who the U.K. describe as a “close associate” of Putin.

In Luxembourg, the story is the same. This is the home of Steel Capital SA, a SPV linked to Severstal PJSC, the steel conglomerate controlled by sanctioned oligarch Alexey Mordashov. The entity, which is in technical default, is run by Vistra.

Sylvia Evans, a spokesperson for Vistra, said the firm had “very limited business dealings with clients in Russia even before the Ukrainian crisis.”

Similar notices have been landing thick and fast since March.

Russian Railways owes billions through a Dublin-based SPV but says it can’t repay; an SPV tied to potash miner Uralkali PJSC, controlled by tycoon Dmitry Mazepin, says the same; Sovcombank, which borrowed $300 million as recently as November but is now under sanctions, has also struggled to make payments.

And at the bottom of each notice: a Cafico-owned email address.