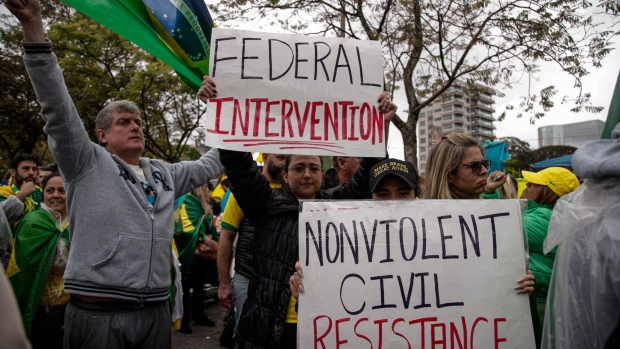 Demonstrators during a pro-Bolsonaro protest at the Military Police Command Headquarters in Sao Paulo on Nov. 2. , Photographer: Tuane Fernandes/Bloomberg

The conservative president had been practically silent in public since his defeat to leftist Lula on Oct. 30. His supporters, meanwhile, have been protesting the election’s result by blocking highways across the country and demanding military intervention.

“The armed forces are united, they owe loyalty to our people,” Bolsonaro told a small number of supporters gathered in front of his official residence on Friday. “The ones who decide what the armed forces are going to do are you.”

Bolsonaro said he was “fighting the system” as he tried to respond to criticism from his own backers who had grown impatient about his silence. Brazil is going through a “crucial moment,” he said, and it’s up to the people to take control of their destiny. His speech lasted about 15 minutes and was broadcast live by supporters on social media.

Lula’s election is expected to be certified by Brazil’s electoral court on Monday, a week earlier than initially scheduled. After that, challenges to the vote can no longer be submitted to the electoral court.

Last month, Bolsonaro’s Liberal Party sought to annul votes that gave Lula a narrow victory in the runoff election, but the case backfired as the court considered the allegations made in “bad faith,” fining the party in 23 million reais ($4.4 million).

The president-elect, who takes office on Jan. 1, unveiled earlier on Friday his first cabinet members, including a defense minister who was given the task of rebuilding bridges with the military. Right after his appointment, Jose Mucio Monteiro announced new commanders for the armed forces.

Lula’s Chief of Staff Rui Costa said Bolsonaro’s remarks cause no concern as the Brazilian people have already decided their future.

“All the recent attempts against democracy in the world have made no progress,” he said.