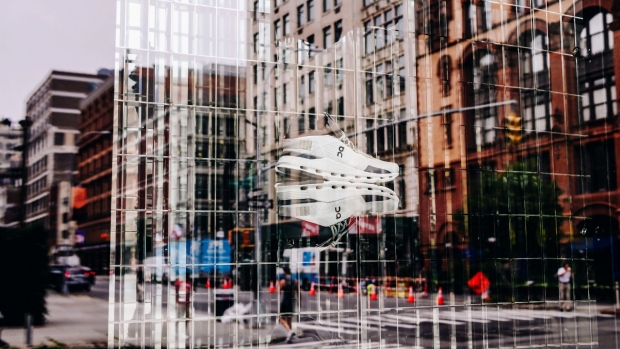 An employee organizes sneakers at On NYC flagship store in the NoHo neighborhood of New York, U.S., on Wednesday, July 21, 2021. On has been preparing for an initial public offering in New York that could value the company as high as $5 billion, Bloomberg reported in April, citing people with knowledge of the matter. , Bloomberg

(Bloomberg) -- The maker of On Running performance shoes priced its U.S. initial public offering above a marketed range to raise $746 million.

On Holding AG and some of its investors sold 31.1 million shares for $24 each on Tuesday, according to a statement confirming an earlier report by Bloomberg News. The company had marketed the shares for $20 to $22 each.

The shoe brand, which counts tennis legend Roger Federer among its investors, would have a market value of about $7.3 billion based on the outstanding shares listed in filings with the U.S. Securities and Exchange Commission. Federer became a shareholder of On in 2019, and last year the company unveiled a shoe named after him that he helped design.

On is the first of two shoemakers set to go public this month. Allbirds Inc. is seeking to debut next week. Both companies operate on a direct-to-consumer basis, with mostly online sales and minimal brick-and-mortar footprint.

The Zurich-based shoemaker is also the second sports-related Swiss company to go public in the U.S. this week. Sportradar Group AG, the sports data provider, fell in its Tuesday debut, giving it a market value of $7.4 billion.

On Running’s IPO was led by Goldman Sachs Group Inc., Morgan Stanley and JPMorgan Chase & Co. The company’s shares are expected to begin trading Wednesday on the New York Stock Exchange under the symbol ONON.