On the hunt for Yellowknife's next big gold discovery - BNN Bloomberg
{{ currentBoardShortName }}
Markets
As of: {{timeStamp.date}}
{{timeStamp.time}} 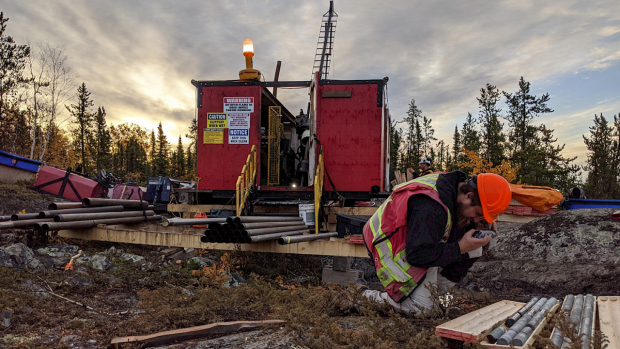 Drill crew and core. , Courtesy of Market One Media

Gold is an investment as old as time. It’s an asset that tends to do well in times of crisis and when inflation rears up, gold is needed for financial security.

With COVID-19 still very much with us and the world’s governments and central banks creating oceans of liquidity, both these markers of a strong gold market appear to be in play.

In the current market, Gold Terra Resources (TSXV: YGT | FRA: TX0 | OTCQX: YGTFF) sees an opportunity to make such a discovery. The company’s flagship project is the 800 sq km Yellowknife City Gold project, which surrounds the city of Yellowknife in the Northwest Territories.

The ground Gold Terra holds includes the prolific Campbell Shear structure that produced more than 13 million ounces of gold. The company recently added to its district-scale footprint in the area by signing an option with gold behemoth, Newmont, on land covering the Campbell Shear, the main plumbing system for all of that historic production.

The drills have been turning on this property, and the evidence coming back suggests Gold Terra may be on the trail of the Yellowknife area’s next multi-million-ounce gold deposit.

“We’re looking to make a discovery here on the order of 1-2 million ounces or more — that possibility is pretty much the best current target in the Yellowknife camp. ”— David Suda, President & CEO, Gold Terra Resource Corp.

Mining literally put Yellowknife on the map in 1930—a rush to the area to extract gold discovered in the region (and these days its access to key diamond mines) built the city into what it is today.

Gold Terra’s land position surrounds the city and gives the company control nearby the past-producing Con and Giant mines, historic mines that produced gold for decades in the region. Company CEO, David Suda notes, “The Yellowknife area is a great jurisdiction with a history of past high-grade gold production right in town.”

Yellowknife’s proximity and established infrastructure facilitate Gold Terra’s activities and its location gives the company an advantage over explorers with projects farther afield from civilization. As a mining town, the city has an experienced workforce that can help the company explore cost-effectively.

Yellowknife’s infrastructure means everyone goes home after work, a much cheaper situation than having to lodge, feed and transport a workforce. Gold Terra’s drilling area over the past winter was only a short 15-minute truck ride away from downtown Yellowknife.

Gold Terra Executive Chairman, Gerald Panneton, was actually attracted to the project, in part, due to the underexplored potential of the Campbell Shear which straddles the property for more than 70 km, and of course, to its infrastructure situation.

Having built the Detour Lake project in Quebec into a multi-million-ounce resource, he knows first-hand the costs of building and maintaining a large work camp. “At Detour Lake, we had to build a camp for 800 people, and we don’t have to do that with this project.”

The Campbell Shear: ‘Plumbing system’ for 13 million ounces of gold

The big draw for Panneton, though, was his assessment of YCG’s underexplored potential. In his experience one overarching geologic structure is typically responsible for most of a big district’s gold, and the Campbell Shear that runs roughly north-south through YCG (and that hosted all those 13 million ounces of historic production) is that structure in the Yellowknife district.

The focus early 2021 is on expanding our resource and resume drilling on our highest priority target, the Campbell...

As Panneton says, “The plumbing system for the Con and Giant mines is still there, it’s just a matter of testing it more thoroughly.”

That assessment explains why Gold Terra recently optioned the ground south of Yellowknife from Newmont.

The property covers the section of the Campbell Shear just south of the part that yielded the high-grade Con Mine, which produced between 5-6 million ounces of high-grade gold before low gold prices shuttered the mine in 2002.

This is an underexplored target that really hasn’t been explored since the 1960s, and Gold Terra’s initial drilling on its Yellorex zone has yielded some impressive hits, led by 4.4 m of 10.9 g/t gold and 4.7 m of 14.1 g/t.

Gold Terra sees in these early promising results the chance to drill more of this section of the Campbell Shear, with a clear eye on defining a new multi-million-ounce deposit. Panneton comments, “This area remains open at depth and along strike, so there’s an obvious opportunity to grow the resource.”

1.2 million ounces to build on

For a lot of exploration companies, just having a target with this much potential would be enough to attract investor interest, but Gold Terra also has a recently confirmed, 1.2-million-ounce resource at YCG in its back pocket.

That resource was the result of work on the Sam Otto and Crestaurum deposits that lie approximately 10 km to the north of Yellowknife. These two deposits are likely on subsidiary shears of the main Campbell Shear structure, and they do offer a great additional valuation to Gold Terra’s exploration story.

Suda elaborates, “These are great deposits that we’ve grown by 64 per cent over our past program in 2020, from 735,000 oz to 1,209,000 oz with only 15,000 m at a cost of $ 3 million for a discovery cost of $6 per ounce of gold. And both deposits are still open along strike and at depth. Our current main focus is on making a big discovery along the Campbell Shear, but having a defined deposit near mining infrastructure is a definite feather in our cap.”

Drilling on the Newmont option is on pause after winter drilling and will be starting again in the summer months, while the company waits through the spring thaw in the Northwest Territories, creating a great opportunity for Gold Terra to pause and assess what it has found so far.

The company is intent on staying aggressive on the drilling front and would like to drill another 10,000 m this year on the option. It’s a program that has both Suda and Panneton excited about what comes next.

Suda notes, “Gerald has done this before. He’s seen a lot—has 40 years of experience and built three mines. He wouldn’t be here if the potential wasn’t big.”

Gold Terra sees that potential as nothing less than the chance to outline a new Campbell Shear mine, one with high-grades and the possibility to host a multi-million-ounce deposit.

With higher gold prices likely to provide a supportive environment for a discovery, the future looks bright for Gold Terra Resource Corp.

To learn more about Gold Terra, visit their website here.

Follow Gold Terra on social media to get the most up-to-date news: