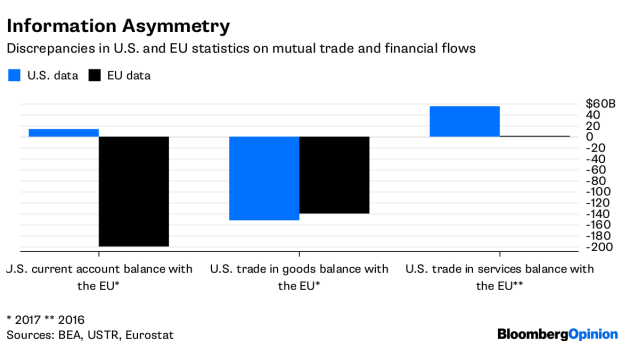 (Bloomberg Opinion) -- After failing to persuade President Donald Trump that punitive tariffs on European imports aren’t a good idea, Chancellor Angela Merkel has apparently decided to fight back by taking a page from his playbook and manipulating facts.

“Trade surpluses are still calculated in a relatively old-fashioned way, based only on goods,” Merkel told a business conference organized by her party on Tuesday. “But if you include services in the trade balance, the U.S. has a big surplus with Europe.”

That sounds like the reverse of Trump’s inaccurate complaint that Europe is running a huge trade surplus with the U.S. thanks to unfair market practices. In fact, the barriers, of the tariff and non-tariff varieties, are pretty evenly aligned, with Europe at a slight advantage. Trump cherry-picks specific imbalances, such as Europe’s higher import duty on cars. Merkel is doing the same, and her statements aren’t necessarily  true, either.

The U.S. Census Bureau estimates the U.S.-EU trade balance in both goods and services at $101.2 billion in favor of Europe for 2017 and $30.4 billion in favor of Europe for the first quarter of 2018. There are no equivalent European data yet, though, and official numbers on the two sides of the Atlantic have differed for years. The EU has tended to report lower services exports to the U.S. than U.S. sources.

To make her point, the chancellor seems to rely on data that more closely track U.S. estimates of the trade relationship than the numbers provided by European Union or German record-keepers. When it comes to services alone, the U.S. Trade Representative put the surplus with the EU at $55 billion in 2016. But Eurostat’s number for that year is starkly different: According to the agency, Europe’s services trade deficit with the U.S. only amounted to 1.3 billion euros ($1.5 billion). That’s not a huge imbalance.

At a briefing on Wednesday, Merkel’s spokesman Steffen Seibert said the chancellor was referring to broader measures of economic interaction. He said the focus shouldn’t be on the trade balance, but on the current account, which includes investments, income from investments and other international transfers. On that basis, Seibert said, the U.S. has a current account surplus of $14 billion vis-a-vis the EU. The data come from the U.S. Bureau of Economic Analysis. But they’re also contradicted by Eurostat figures, which estimated that the EU had a 170 billion euro surplus with the U.S. in 2017. Eurostat has promised to address the discrepancies with U.S. statisticians.

Even the data for Germany alone contradicts Merkel's narrative of victimization on trade. The Bundesbank estimates that Germany had a current account surplus of 51.5 billion euros vis-a-vis the U.S. last year. That includes a goods trade surplus of 54.5 billion euros and a services surplus of 3.4 billion euros, offset by a negative income balance.

But then, data sources and the data themselves don’t matter in the current environment. As Europeans have found out after months of trying to stave off Trump’s tariffs, numbers don’t sway the U.S. president. There’s no way to discuss a messy, complex picture of mutual investment, trade and tax avoidance schemes, marred by huge statistical discrepancies, with a leader who has promised voters to negotiate better terms of trade with the rest of the world.

The only thing Merkel can conceivably do is fight back.  “We have been challenged,” she said in her speech on Tuesday.

So Merkel the conscientious academic, known for her studiousness and careful preparation, is showing Trump that two can play the cherry-picking game with numbers whose greatest value is as rhetorical devices to please the domestic political base. She’s treating the trade war between Europe and the U.S. as a contest of wills rather than an academic dispute.

That’s a bad sign. This sort of contest is sure to escalate before the parties are tempted to look for a compromise, and escalation means the trade war will hurt more industries, and ultimately more workers, than it has already affected both in Europe and the U.S. It would be a far better idea to let statisticians work out their differences first, so that everyone can at least operate with the same set of numbers -- but it may be too late.​​​

To contact the editor responsible for this story: Max Berley at mberley@bloomberg.net