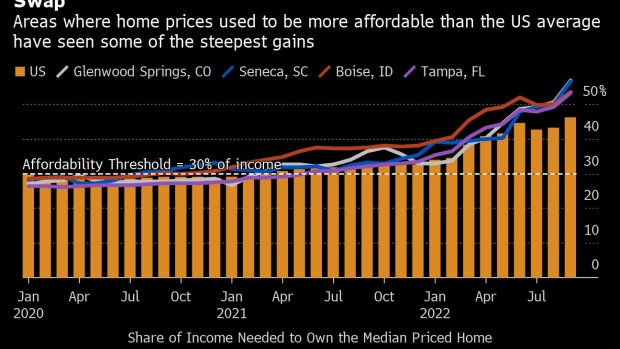 Single family homes under construction in a housing development in Aurora, Colorado, US, on Monday, Oct. 10, 2022. US mortgage rates last week jumped to a 16-year high, marking the seventh-straight weekly increase and spurring the worst slump in home loan applications since the depths of the pandemic. , Bloomberg

(Bloomberg) -- As US home prices soared out of reach for many Americans, some corners of the country that used to have affordable housing markets have seen some of the steepest increases.

In 75 cities, home prices that used to rank better than the national average for affordability are now worse than average, according to data compiled by the Federal Reserve Bank of Atlanta. The biggest swings since the pandemic began were in Glenwood Springs, Colorado and Seneca, South Carolina.

Nationwide, housing affordability is the worst on record, according to the Atlanta Fed data. That’s the result of a combination of soaring home prices while borrowing costs were cheap, and now the steep jump in mortgage interest rates as the Fed tightened monetary policy to fight inflation.

The median-income household would have to spend a record 46% of its income in order to own the median-priced house, although the measure varies widely by location. Cities in the Southeast -- from Nashville and Atlanta to Tampa and Orlando -- have seen some of the sharpest declines in affordability, according to the research by Domonic Purviance at the Atlanta Fed.

Close to the bottom of the rankings is Key West, Florida, where the share of income needed to purchase a median-priced home is close to 100%, leaving no money for anything else.

Many analysts are predicting a housing bust, with price declines reaching the double-digits, that will bring costs back into line with incomes. Still, so far there’s little sign of the kind of inventory buildup of unsold homes that would accompany a large-scale price correction.

“We don’t know necessarily how it’s going to play out,” says Purviance.