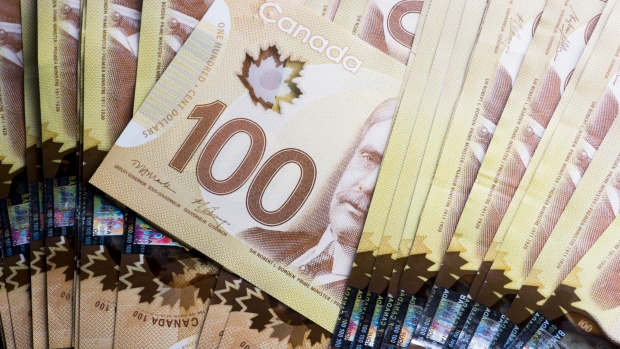 Canadian one hundred dollar banknotes are arranged for a photograph in Toronto, Ontario. Bloomberg/Brent Lewin

During a historic week where crude oil futures plunged below zero for the first time ever, the Canadian dollar did something strange: it stood firm.

Commonly seen as a petrocurrency, the loonie was resilient this week with a mere 0.7-per-cent slide against the greenback. That compares with the West Texas Intermediate price which slumped seven per cent, clawing back from losses that went as far as a whopping 321 per cent to -US$40 a barrel on Monday. Other oil-linked currencies had more pronounced responses: the Mexican peso plunged 5.6 per cent this week and the Norwegian Krone dropped more than three per cent.

The correlation between the Canadian currency and crude had been in sync for most of this year as the coronavirus brought the global economy to a standstill, hitting demand for crude with the oil-price war intensifying. The relationship weakened in late March, however, when markets were their most volatile and further unraveled this week as investors exited front-month oil futures contracts on worries there’s little space for storage amid the existing global glut.

Market watchers offered several theories for the breakdown. Some said investors had priced in the supply glut and demand slump, while others speculated that further weakening would only be a matter of time with the nation’s high consumer debt levels and a tight property market that may crash and hurt the currency. 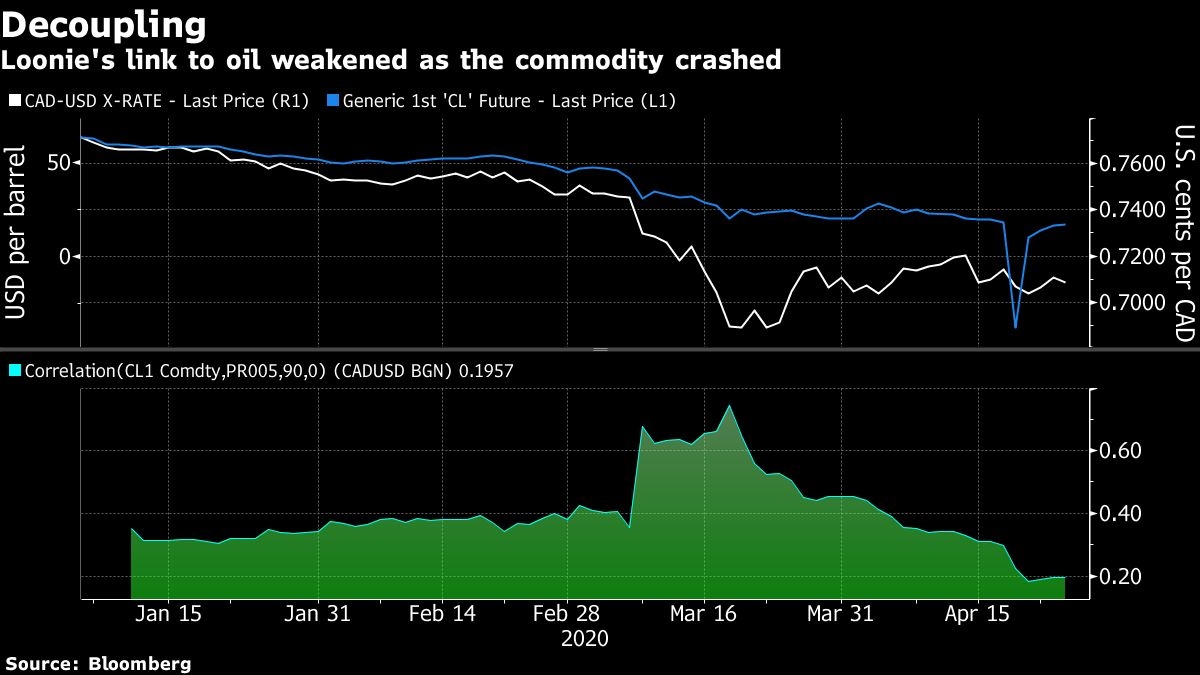 For Shaun Osborne, chief foreign exchange strategist at Bank of Nova Scotia, the loonie’s performance is driven more so by the economic impact of the coronavirus than futures pricing of oil. Traders had already priced in much of the global oil supply and demand shortfall before this price slump, and were able to see crude’s negative pricing as a short-term issue. It’s “symptomatic of a market that is almost exclusively focused on the COVID-19 situation,” he said.

And instead of delivery issues on the front-month WTI, the currency market was focused on what was happening across all contracts and grades, said Greg Anderson, global head of FX strategy at Bank of Montreal.

“When Canadian producers hedge, it tends to be for tenors out way past the near month and they usually don’t roll right before the delivery date either, so I don’t think these gyrations forced Canadian producers into doing dramatic things” that would weaken the Canadian dollar, such as exiting their corresponding USDCAD hedges, he said.

All eyes are on oil producers who are among the worst-affected by the production glut due to pipeline bottlenecks preventing the passage of more crude to U.S. refineries.

Bipan Rai, strategist at Canadian Imperial Bank of Commerce, said investors are watching longer-term oil futures’ contract dates because “demand should recover to a degree” by that time and that’s where the correlation between the Canadian dollar and WTI is tighter.

“The FX market understands that the demand shock is temporary, and the prompt contract doesn’t necessarily reflect the true fundamentals of the crude market,” he said.

The loonie’s lack of volatility relative to that seen in crude markets and other petrocurrencies supports the idea that the economic implications of marginal moves in oil at extreme price levels is limited, strategists including Simon Harvey at Monex Canada wrote in a note.

With WTI and Western Canada crude prices plummeting, “the extraction of oil in Canada is loss-making regardless of any further price movements,” they said. With Canada’s energy sector in tatters, Harvey expects the loonie to remain relatively numb to oil market dynamics and trade within the $1.40-$1.42 area, he said.

For Mark McCormick, global head of FX strategy at Toronto-Dominion Bank, the loonie “should be lower for sure.” TD’s high-frequency fair value model that incorporates oil shows a one-standard deviation gap between the loonie’s current price and the level implied by the model.

“The half-life of the framework is quite fast — less than a month, so one to two standard-deviations are big gaps,” he said.

Over the longer-term, the oil malaise poses structural problems because it’s likely to impact the trade deficit and in turn the current account deficit, he added. At the same time, Canadian households are exposed to high levels of debt accumulation and there are challenges in the housing market.

“There will also be knock-off effects to the housing market, which reinforces the deleveraging story” and will contribute to a more “vulnerable” Canadian dollar, he added.