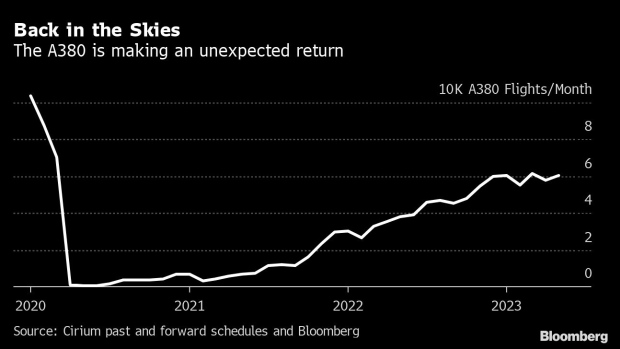 ALICE SPRINGS, AUSTRALIA - MAY 15: Grounded aeroplanes which include Airbus A380s, Boeing MAX 8s and other smaller aircrafts are seen at the Asia Pacific Aircraft Storage facility on May 15, 2020 in Alice Springs, Australia. The number of passenger planes housed at the Asia Pacific Aircraft Storage facility has increased due to the Coronavirus (COVID-19) pandemic with at least four Airbus A380 planes grounded there, the first time the aircraft has landed at Alice Springs. (Photo by Steve Strike/Getty Images) , Photographer: Steve Strike/Getty Images AsiaPac

(Bloomberg) -- Written off as an over-sized anachronism when Covid-19 upended aviation, the world’s largest passenger plane is enjoying an unlikely revival to handle an overwhelming rebound in air travel.

Many airlines struggled to see a future for their enormous Airbus SE A380s when the pandemic grounded fleets in early 2020. Qantas Airways Ltd. parked its 12 double-deckers in the Californian desert, saying they wouldn’t be needed for at least three years, while Etihad Airways said it’s not clear if its 10 superjumbos will ever fly again.

But this year’s sudden travel recovery has given the cavernous jets -- often seating more than 500 people -- a new lease of life. They have become the long-range jumbo of choice for airlines from the UK to the Gulf and Australia as passenger volumes stretch aviation workforces that were depleted during the crisis.

By the end of 2022, monthly A380 flights will be almost 60% of pre-Covid totals, Cirium data show, defying the jet’s doubters. British Airways will operate more A380 flights by the end of the year than it did before Covid-19.

As international travel returns, the A380’s carrying ability is validating -- at least for now -- the massive bet by its No. 1 buyer Emirates Group of Dubai and proving useful for carriers such as Qantas that didn’t permanently turn their backs on the giant plane.

The superjumbo -- seen as heralding a luxurious new chapter for aviation with its onboard bars and whisper-quiet interior when it was introduced in 2005 -- was already falling out of favor before the pandemic hit, as airlines turned to smaller, more fuel-efficient planes. Airbus killed off the program in 2019.

Malaysia Airlines Bhd., Germany’s Deutsche Lufthansa AG and Air France-KLM are among carriers selling or phasing out their fleets.

In June 2020, as Covid-19 swept across around the world, airlines worldwide operated just 43 passenger flights using A380s. The rollout of vaccinations, which allowed governments to peel back border controls, has since changed the picture.

This month, there are almost 4,000 scheduled services using the A380, and about 6,000 planned for January 2023, according to Cirium. Superjumbo services at Singapore Airlines Ltd., which turned one of the jets into a restaurant during the pandemic, will be almost back to normal by the end of 2022, the data show.

The A380’s appeal to airlines has always been limited. It found no buyers in the US, Latin America or Africa, for instance. Should the current surge in travel demand fade and oil prices stay elevated, carriers like IAG SA’s British Airways may struggle to justify running partially full, four-engined A380s. The arrival of newer, fuel-efficient aircraft would once again pose an existential threat to the superjumbo.

Still, the A380’s value to airlines is likely to extend beyond the current surge, said John Grant, chief analyst at aviation data provider OAG. That’s partly because the small group of carriers flying the plane are either financially committed to the jet or don’t have an immediate alternative, he said.

“I think it has a future for some carriers,” said Grant. “Airlines may well be hoping -- or praying -- that in 18 months’ time the price of oil will be lower and the A380 will be an ideal aircraft.”

The A380 made its first flight in 2005 and won over passengers with its audacious scale -- its wingspan is wider than a soccer pitch. Ultimately, though, airlines were turned off by its high operating costs.

Airbus sold just 251 of the planes and the last delivery, to Emirates, was made in November 2021. The aircraft remains a polarizing force. Qatar Airways CEO Akbar Al Baker has described the A380 as the airline’s “biggest mistake.”

Air France-KLM’s French arm is happy to have pulled its 10 A380s from service in 2020, two years earlier than initially planned, avoiding a refurbishment bill of about 400 million euros ($420 million), Anne Rigail, who heads the division, said in Paris Thursday.

“The costs were so high that it was in our interest to move to new-generation planes that are more fuel efficient,” she said. “The A380s were put on the most important routes but were pretty complicated to fill.”

Not everyone sees it that way. Sydney-based Qantas has already put three of it planes back in service and plans to have half the fleet in the air by the end of 2022 for long-haul routes including the flagship Sydney-London service. Ten refitted Qantas A380s are due to return to the skies by early 2024.

Emirates, which operates more than 100 A380s, is retrofitting many of them with premium-economy seats, a class that’s proving popular with leisure travelers with money to burn as the pandemic fades.

And even unwanted A380s will mostly avoid the scrapyard for now, with France’s Chateauroux airport, about 250 kilometers south of Paris, inaugurating a giant hanger designed to house the double-deckers at the start of next month.