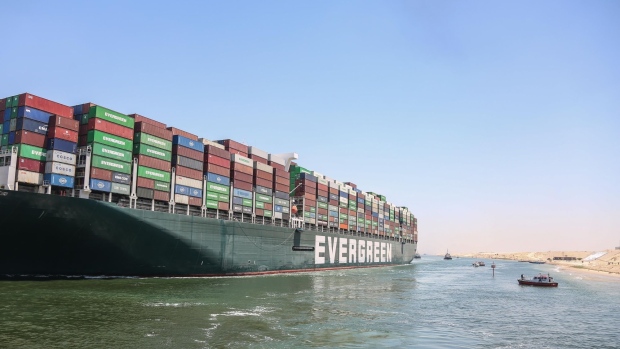 The Ever Given container ship sails along the waterway, after being released by the Suez Canal Authority, to depart the Suez Canal in Ismailia, Egypt, on Wednesday, July 7, 2021. The giant Japanese-owned vessel carrying some $1 billion worth of cargo, lost control last March as it traveled north through the canal, crashing into the banks and blocking the waterway like a giant cork for nearly a week. , Bloomberg

Less than nine months after getting stuck in the Suez Canal, the Ever Given appears ready to give the northbound passage another try.

The 400-meter-long (1,312 feet) container carrier is currently steaming southeast of Yemen with “Suez” logged as the next destination, according to mapping data compiled by Bloomberg. It’s apparently close to fully loaded, sitting in the water just shy of its maximum 16-meter draft. Estimated day of arrival in Suez is listed as Dec. 12.

Capable of carrying about 20,000 containers measured in 20-foot equivalent units, the vessel spent six days in late March wedged lengthwise across the busy waterway, backing up marine traffic in both directions. It remained anchored for the next three months in the Great Bitter Lake -- about halfway along the canal -- while legal matters were sorted out before continuing its journey to northern Europe.

​The ship returned to Asia by traveling southward through the canal in August and underwent repairs at a Chinese shipyard starting in October, before heading back toward Europe in late November. The vessel is owned by Japan’s Shoei Kisen Kaisha Ltd. and operated by Taiwan’s Evergreen Marine Corp.

There’s no reason to be alarmed. The ship hasn’t had any mishaps since the last one, and navigation through the canal is normally straightforward.