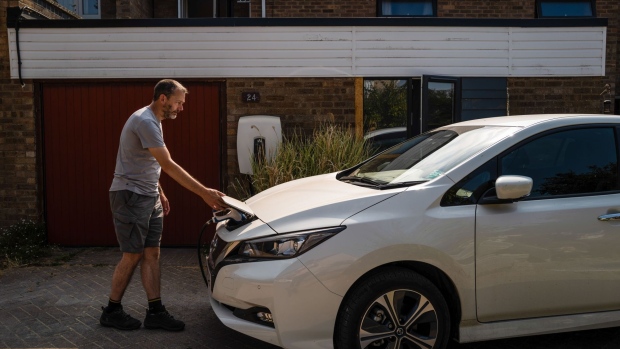 (Bloomberg) -- Paul Kershaw is not a God — that would be his dog, “God” — but he does harness the power of the wind and sun.

Every morning at his home near Cambridge in the UK, Kershaw charges up his Nissan Leaf, in part from the 12 turbines at the Red Tile Wind Farm a few miles west and the Ryston Solar Farm a few miles north. Every evening, Kershaw then unleashes that same power to his neighbors, right when they need it most. The 51-year-old, who is retired on disability, only drives his car on occasion — mainly when it’s time to take God on a scenic walk.

“It’s just a really great feeling knowing you’re doing something positive,” Kershaw says. “It’s not just a car anymore ... the solution is in the problem.”

Kershaw is one of 350 UK residents who have been pumping electricity from their vehicles to surrounding homes and businesses since 2018, a nascent bit of energy arbitrage known as vehicle-to-grid charging, or V2G. The idea is for EVs to charge their own batteries when renewable energy is ripe — typically midday — and then discharge some of that electricity when power demand is high and renewable generation is low, usually around 5 to 10 p.m.

For now, the UK’s V2G practitioners are just part of a trial, one of several in Europe. It’s confined to Leaf vehicles, and the cost of the smart-charging hardware was covered by a government subsidy. But with enough cars, compliant car owners and obliging utilities, V2G could set off a cascade of climate-positive electrical outcomes, helping utilities use more renewable energy, avoid firing up gas or coal-burning plants, and maybe even build fewer of them.

The timing is propitious: At the moment, the European energy market is a mess. There’s been a gush of renewable energy as costs decline for solar panels and wind turbines, but supply-demand mismatches mean that energy often goes unused, according to Kaluza, a UK company that builds software for global utilities, including the ones handling the V2G trial. When there is a demand peak, European utilities often have to fire up extra generation, typically by burning coal or natural gas, roughly half of which has traditionally come from Russia.

The result is a wholesale market that whipsaws wildly through the course of any given day and has only been exacerbated by the war in Ukraine and recent heat waves. In the UK these days, the price even goes negative a few hundred times a year; utilities are actually paying market participants to consume their electricity.

Many EVs don’t yet have the capacity to send power in the other direction, though it’s a feature of some of the fastest-selling models, including the Ford F-150 Lightning, the Hyundai Ioniq 5 and the Kia EV6. The success of those machines is forcing the hand of rivals, essentially making bi-directional charging table stakes in the EV game.

Other than a car with bi-directional capabilities, drivers need a charging unit that can switch the current coming from the car back to the home. Wallbox, a Barcelona-based hardware company, has sold about 250,000 smart chargers to date and is fast transitioning to units that pump power both ways, according to CEO Enric Asuncion.

Five years from now, Asuncion expects one in three EV owners will be sending battery power from the car back to the grid, or at least to their home. “A car is only used 10% of the time, so for users, it’s a way to save money,” he says. “And car companies are planning to make it very clear to them.” Having a car that serves as a backup battery or utility storage bank will become a particularly huge selling point for homeowners like Kershaw, who is also investing in energy-efficient heating and a water-saving showerhead, and in places with both a lot of renewable power and high demand peaks, including California and Texas.

That trajectory also suggests a potential flywheel dynamic. Ultimately, the ability to function as a tiny power plant may convince EV-curious consumers — or even EV skeptics — to take the leap. And if bi-directional charging sparks EV adoption, it will, in turn, spark more V2G capacity. “If you look at the marketing from car companies, it’s pretty high up there,” says Ryan Fisher, an analyst at clean energy research group BloombergNEF. “And people just kind of want that next level of fancy.”

Paying nothing for power

At the Kaluza nerve center in London, Conor Maher McWilliams, the company’s head of client solutions, monitors the UK’s 350 grid-supporting vehicles on a map, like soldiers in an electron battlefield. Each car is a dot and as the day progresses they transition from blue (charging), to gray (idle), and finally to green in the evening, as they pump power back onto the grid.

“Our job is to take all of those status updates from the vehicles and [weather] forecasts and availability, and to turn that into like a big battery — a virtual power plant,” McWilliams says.

Last year, the 350 cars plugged into Kaluza’s V2G platform collectively fed .891 gigawatts of electricity back to their adjacent homes and to OVO, Energy Ltd., one of the country’s largest utilities; that’s enough to power about 287 British homes for a year. The average participant made roughly $500 over the course of the year before paying the standard electric bill. Kershaw, who charges his car via a solar array on his roof before feeding the same power back to the grid, pays essentially nothing for electricity these days.

By 2040, when the number of EVs in the UK is expected to hit 28 million, BNEF estimates V2G could supply enough battery capacity to power the entire country for almost two days, though the idle EV fleet would only be called on about 200 days a year. If those vehicles participated en masse, the share of electricity coming from renewable sources would surge from 76% to 82% and there would be an 11% to 19% reduction in CO2 from electricity generation. “It can have a really big impact,” says BNEF’s Fisher.

To make that kind of impact, however, utilities will first have to expand tiny trials into formal offerings open to any ratepayers with an EV snoozing in the driveway. Steve Kosowski, manager of long-range strategy at Kia America, thinks smaller, less official V2G projects might start popping up all over the place, “almost a community micro-grid. A utility might say, ‘We see you all have 15 EVs in this neighborhood,’” he says. “‘How would you like to save 20% on your electricity?’”