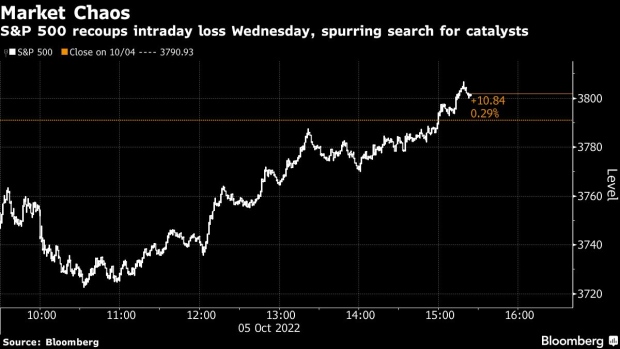 (Bloomberg) -- One giant options transaction may have sparked the S&P 500’s bounce on Wednesday, according to Wells Fargo & Co.

The trade, which involved buying and selling call options tied to the index at a cost of around $31 million, probably helped fuel a recovery that saw the benchmark gauge erase a 1.8% decline, says Chris Harvey, the firm’s head of equity strategy.

Theories that derivatives trading has potentially driven movement in an underlying asset have been relatively common in this year’s topsy-turvy markets, though are also often disputed. Generally, the view is that a market maker on the other side of an options transaction will have to buy or sell stocks to balance positioning.

Depending on the exposure, a concept referred to by the Greek word delta, the dealer may exert outsized influence on the market. This time, in the eyes of Harvey, the impact was positive.

“The Greeks of the trade are likely what gave a mid-day pop to the S&P 500,” Harvey wrote in a note to clients.

“The dealers who took the other side of this had a huge amount of risk to offset,” said Gareth Ryan, managing director at IUR Capital, adding that they could have bought equity futures to keep their books neutral. “It certainly could’ve impacted the cash market. This is one of the largest trades by size that I have seen in a long time.”

Not everyone sees the transaction as an obvious reason for the S&P 500’s spike. Chris Murphy, co-head of derivatives strategy at Susquehanna International Group, noted the S&P 500’s recovery coincided with a retreat in the dollar and an upward revision in the Federal Reserve Bank of Atlanta’s GDPNow index.

“The USD pulling back off highs was the main catalyst for the S&P rebound, plus the Atlanta GDP upgrade,” Murphy said. “The delta component of that options trade was not huge. It did not have a big impact on the S&P 500 rally.”