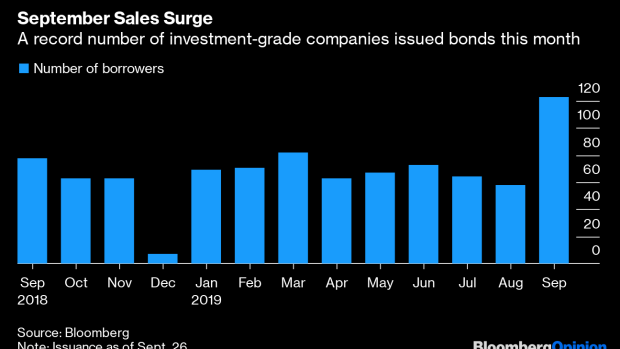 LONDON, ENGLAND - JUNE 08: A gallery assistant poses with '$, 2001' an installation by Tim Noble and Sue Webster which is going on show at Sotheby's with an estimated value of £100,000-£150,000 on June 8, 2015 in London, England. The installation forms part of an exhibition of 21 works inspired by the US Dollar which are estimated to have a total value of £50 million and will go under offer by the auction house on 1st and 2nd July 2015. (Photo by Mary Turner/Getty Images) , Photographer: Mary Turner/Getty Images Europe

(Bloomberg Opinion) -- This past month has been one for the history books —  and not necessarily in a good way in many corners of the financial markets.

All of this happened over the past four weeks:

Add it all up, and it would seem like a shaky time for companies to tap the bond markets. Indeed, as Bloomberg News reported last week, at least four junk-bond deals have been scrapped this month in a sign of waning appetite for investing in businesses with excessive debt or sectors more sensitive to an economic downturn.

Yet these September storm clouds missed the U.S. investment-grade corporate bond market entirely. Just looking at high-grade debt sales from this past month, you’d think there was nothing but sunny skies for financial markets.

A whopping 127 investment-grade bond deals cleared the market in September. That easily topped September 2017’s 110 offerings to become the busiest month ever, according to Bloomberg News’s Michael Gambale, who went through 20 years of records. And there’s still one more day to pile on. As it stood at the end of last week, the total monthly volume of about $155 billion fell short of the $177 billion from May 2016 but would still finish as the third highest of all time and the most debt ever issued in September.

Now, this wasn’t entirely a shock. Investment-grade companies like Apple Inc., Deere & Co. and Walt Disney Co. borrowed almost $75 billion in the first week of the month, a record since at least 1972. But that was soon after 30-year Treasury yields touched an all-time low of 1.9%, making bond sales way too tempting to pass up. Within two weeks, the yield  was approaching 2.4% — still low, to be sure, but a sharp enough increase to saddle some traders with nearly double-digit losses.(1)

Clearly, corporate treasurers pressed on unabated. Notably, the impetus to borrow was mostly to refinance debt at a lower cost and extend maturities rather than financing a large merger or acquisition. In other words, companies saw a chance to lock in savings or create a more optimal capital structure and moved forward regardless of the conditions outside the primary market for investment-grade bonds.

What’s equally impressive is that in the face of this borrowing binge, corporate bonds largely held their value. Yield spreads remain below their one-year average. Yes, the market snapped a nine-month winning streak, but it declined by only about 0.8%, compared with a 1% drop for U.S. Treasuries. Investors added more than $1 billion to investment-grade funds in the week ended Sept. 25 after pouring in $2.83 billion during the prior period, suggesting the small pullback hasn’t scared them away.

High-yield funds, by contrast, suffered outflows in the most recent weekly data as yield spreads widened to a two-week high. It followed an inflow of $3.3 billion, the highest since February. As I wrote earlier this month, investors could have used this large wave of new bonds hitting the market to clean up their portfolios, subbing out junk debt for higher-quality securities. Perhaps that shift is beginning. But it’s hard to give up such high-yielding bonds when momentum is on your side — the speculative-grade market is one of the few in fixed income with a positive total return in September.

The incredible run in investment-grade corporate bonds, both in terms of borrowing and investing, suggests that high-quality American companies are the sweet spot in a global debt market still starved for yield and uneasy about the fate of the world economy. It’s telling, for instance, that bonds from the small share of triple-A rated U.S. companies have returned almost 15% in 2019, better than any other rating category and nearly double the gains for Treasuries. And while the line is getting blurred between triple-B and double-B securities, it’s the investment-grade portion that has delivered bigger profits to investors this year.

September has always been a popular month for corporate borrowing, so even with benchmark yields settling back into a range, it’s unlikely that companies will flood the market to the same extent in the fourth quarter. That doesn’t mean the party has to end for bond buyers, though. If investment-grade debt could remain so unflappable over the past month, that means it’ll require a serious shock to knock this market off track.