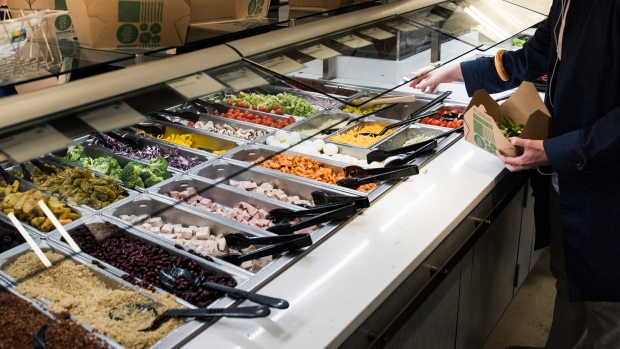 A man serves himself from the "Build Your Own Salad" bar at a Whole Foods Market Inc. location in New York. , Photographer: Mark Kauzlarich/Bloomberg

(Bloomberg) -- About a year ago, Cascades Sonoco Inc. learned that its coated paper, which at the time was being used in Whole Foods Market takeout cartons, contained controversial—even potentially harmful—chemicals.

The revelation came not from the Food & Drug Administration, which had cleared some chemicals in the class of compounds known as PFAS for use in food packaging. Nor was it from the famously health-conscious grocer, or the industry group that had certified the containers as compostable. Instead Cascades Sonoco received the alert from San Francisco, which plans to ban all PFAS in food packaging next year.

“It was FDA-approved, so it never would have raised a flag,” says Jeff Stacy, a Cascades Sonoco paper packaging manager. The company, a joint venture between Cascades Inc. and Sonoco Products Co., has since reformulated the product after tests discovered some form of PFAS that the company declined to name. Whole Foods also says its stores are now PFAS-free.

Companies confront a growing thicket of incongruous rules covering this class of 3,000 to 5,000 chemicals, pronounced “PEE-fas.” Some older phased-out varieties have been linked to cancer, but many scientists caution against the entire class, also known as PFCs or “fluorinated” compounds.

The challenge is especially pronounced for the food packaging industry, where the FDA’s assurances on some newer varieties clash with piecemeal rules from industry associations and some cities and states. Washington state may also ban all PFAS in food packaging by 2022, and New York has agreed to restrict state agencies from purchasing products containing the chemicals. To further complicate the issue, the Environmental Protection Agency has also started to review some of the chemicals.

PFAS have been around since the 1940s and are used to make everything from outdoor gear to carpeting. The man-made chemicals break down slowly and accumulate over time. In 2017, the Biodegradable Products Institute, which had previously approved some coated papers containing FDA-cleared PFAS, said the chemicals persist in compost and can be absorbed by fruits and vegetables. The group has called on companies to submit tests showing whether the chemicals are present by the end of March.

The Solid Waste Association of North America meanwhile has said “food waste” contributes to PFAS in landfills and that runoff from dumps has sometimes polluted nearby groundwater. Last year, city officials in Flint, Michigan—already grappling with lead-contaminated water—ordered the cleanup of a local landfill contaminated with PFAS. Filtering PFAS “leachate” has become an emerging market for companies like Evoqua Water Technologies, which has begun installing filters at landfills.

The Food Safety Alliance for Packaging has suggested that companies stop using older varieties of the chemicals that have mostly been phased out, and that they “minimize use” of the newer varieties commonly used in the U.S.

Yet from 2002 to 2016 the FDA cleared some 14 different kinds of the new PFAS for “food contact” uses, according to the Environmental Defense Fund. The New York-based group says companies that got the green light include Archroma, AGC Inc. (formerly Asahi Glass Co.), Solenis LLC, Solvay SA, Daikin Industries Ltd. and Chemours Co. Daikin declined to comment, AGC said it uses chemicals approved by the FDA, and the other companies didn’t respond to requests for comment.

The FluoroCouncil, which represents chemical makers, says the FDA-reviewed substances haven’t been linked to cancer or other significant health effects. Its Executive Director Jessica Bowman says bans like San Francisco’s are “contrary to sound science and will provide no further benefits to public health or the environment.”

The EDF, however, calls the FDA approvals a “serious breakdown in assessing food additive safety.” Data submitted to the FDA failed to assess how the chemicals react with one other and other substances, says EDF Chemical Policy Director Tom Neltner, who adds that Daikin didn’t submit a study it had done on rats showing “changes to their livers and kidneys.”

“We think FDA should re-evaluate the safety of all these PFAS that it’s approved based on what we now know about the risk,” Neltner says. The FDA should also share its data on the food-contact PFAS with the EPA and states, he says, given the coated paper industry’s potential impact on U.S. drinking water around paper mills.

The FDA said it was reviewing whether it could comment amid the ongoing government shutdown.

“We think FDA should re-evaluate the safety of all these PFAS that it’s approved based on what we now know about the risk.”

Because the agency cleared the chemicals, some companies might be hesitant to remove them. Yet Cascades Sonoco did so, even though it wasn’t easy. After the call from San Francisco, the company hired the University of Notre Dame for testing, and reviewed all its equipment—including transport—to rule out accidental contamination. Cascades Sonoco finally pinpointed one coating ingredient and asked its supplier to help reformulate it. Even then, tests found small amounts. Another reformulation was done, says Stacy, who declined to name the supplier.

Today, Cascades Sonoco has removed the chemicals from all of its products—even the lubrication on its machinery. “There could be cross-contamination,” Stacy says, “so we said ‘let’s get everything out.’”

Fold-Pak, which shapes Cascades Sonoco’s paper into the Bio-Plus Terra II takeout containers sold to Whole Foods, says it has also eliminated PFAS. Whole Foods declined to say when it did so, except to say it had removed all offending packaging. “There is limited availability of environmentally responsible packaging made without this substance, and we’re actively working with our suppliers to find and scale new options,” a spokeswoman says.

Even though the grocer has removed the chemicals, concerns persist among some environmentally aware consumers. Vanessa Hradsky, a 44-year-old Brooklyn resident, says Whole Foods has been her go-to food store for years thanks to its health-conscious approach. Now, having read that takeout containers once contained PFAS, she plans to be “a lot more cautious about what I buy there.”

--With assistance from Deena Shanker.

To contact the author of this story: Tiffany Kary in New York at tkary@bloomberg.net

To contact the editor responsible for this story: Robin Ajello at rajello@bloomberg.net, Anne Riley Moffat