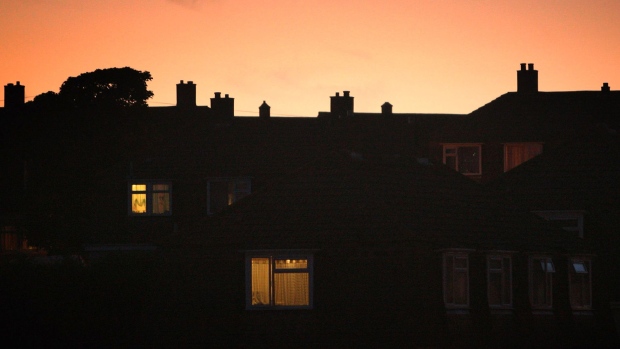 REDRUTH, UNITED KINGDOM - JULY 25: Lights illuminate windows in houses as on the Close Hill estate at sunset, where a voluntary night curfew for all under 16-year-olds has recently been introduced, on July 25, 2008 in Redruth, England. The brainchild of community police officer PC Marc Griffin, Operation Goodnight in Redruth, Cornwall, will see officers given the power to remove any youth under 16 seen on the streets after 9pm and any child under 10 after 8pm. It has been introduced to coincide with the start of the summer holidays and aims to cut down anti-social behaviour and will be the first to punish parents for letting their children out alone at night. (Photo by Matt Cardy/Getty Images) , Photographer: Matt Cardy/Getty Images Europe

(Bloomberg) -- More than one-in-five people in the UK say they’re struggling to pay their bills because of a record surge in the cost of living, a poll by YouGov Plc shows.

The market research company said there’s been a 12-point increase in the proportion of people reporting hardship in the past year, and half of those surveyed said their financial position deteriorated in the past month.

The data explain a plunge in consumer confidence that bodes ill for the British economy. The warning comes as Prime Minister Boris Johnson’s government prepares to outline billions of pounds of support for households struggling with spiralling energy costs and higher taxes.

YouGov said 22% of Britons are struggling or unable to make ends meet, with 60% expecting their finances to get worse in the next year. Older people are doing better, with just 13% saying they’re finding it difficult.