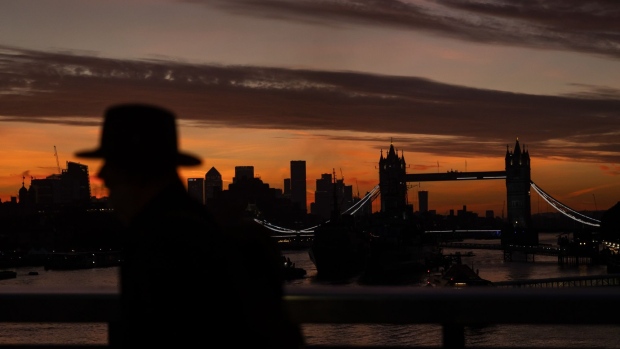 A commuter passes Tower Bridge in the City of London, UK, on Monday Oct. 3, 2022. Traders are the most negative ever on the pound’s prospects, even after the UK government scrapped one of its new tax policies, a sign it will take a bigger policy U-turn to restore credibility with markets. Photographer: Carlos Jasso/Bloomberg , Bloomberg

More than a fifth of British businesses aren’t confident they can weather a looming recession, according to a study published by wealth management, accounting and consulting firm Evelyn Partners.

Almost half of the firms recognize there’s a likelihood they could face bankruptcy or insolvency in the coming months with 15% saying that such an outcome looks highly likely, according to research of 501 UK business owners with revenue in excess of £5 million ($5.6 million).

Soaring inflation, rising borrowing costs and a weaker pound continue to pile pressure on British companies. UK firms now have the highest level of distress among corporates in major European economies, according to a report published this week by law firm Weil Gotshal & Manges.

M&A activity has also taken a hit in the current economic climate. One-in-five business owners have already postponed or pulled out of M&A activity, while a further 48% are thinking about doing so, according to the Evelyn Partners report published Thursday.

Meanwhile, a quarter of business owners have already refinanced their debt, while a further 43% are considering doing so, the survey showed.

Evelyn Partners said research of the business owners was conducted by Censuswide from Sept. 9 to Sept. 14.