More than a third of U.S. workers changed employers or lost their jobs since the start of the pandemic, double the typical level in the previous two decades, according to a study.

Among workers who had a job in February 2020, almost 37 per cent were no longer with their employer a year later, according to a paper by Alexander Bick of Arizona State University and Adam Blandin of Virginia Commonwealth University. Almost 26 per cent had a different employer, and the remaining 11 per cent were out of a job.

The historically high level of churn, or rate of change, underscores the colossal challenge of bringing back millions of people to the labor market as the economy reopens. 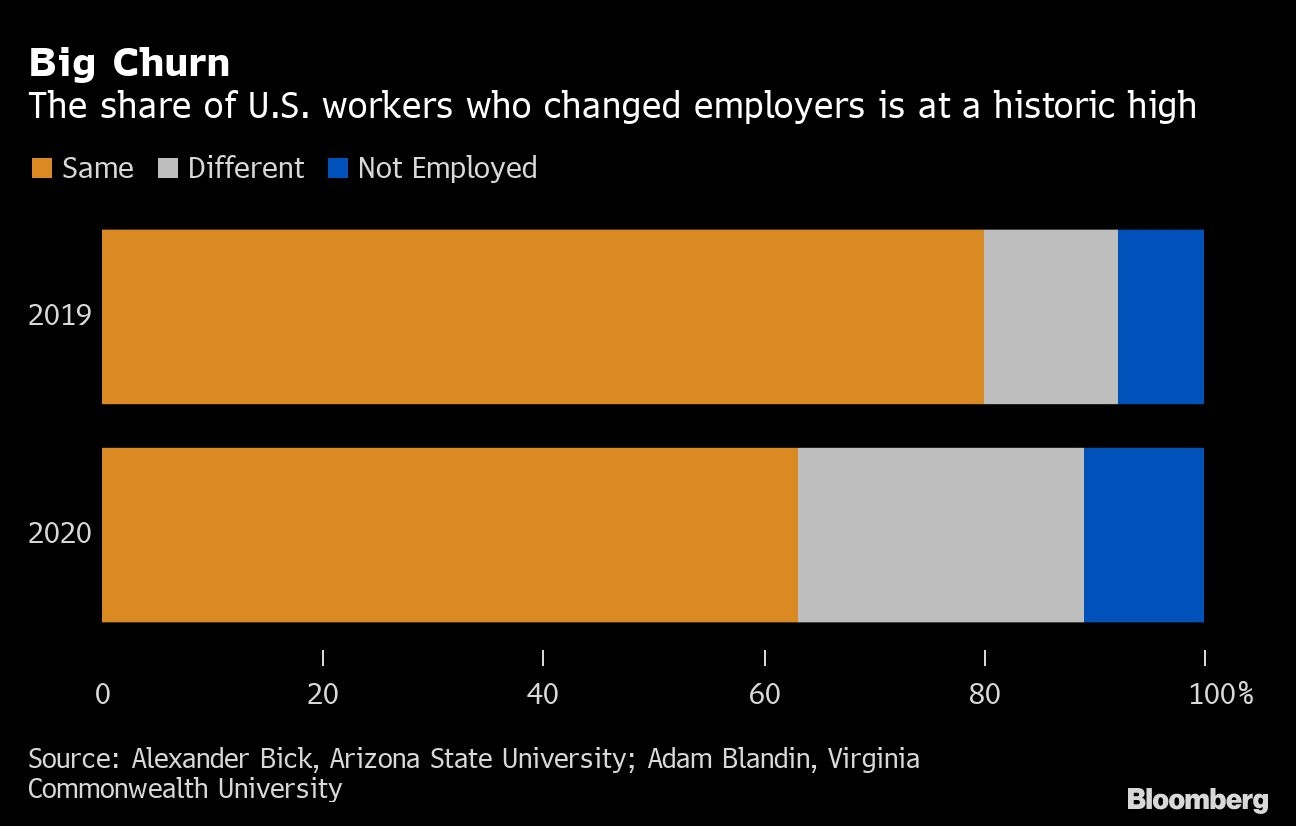 Millions of workers who lost their jobs in the spring of 2020 were back at work in March this year, and the paper implies that the recovery is largely due to people finding new jobs, rather returning to their old employers.

“Shocks in the initial months of the pandemic may have permanently destroyed a large share of employer-worker matches, many of which may have been highly productive,” the authors wrote. “Because highly productive matches are costly to find, the economic disruption induced by COVID-19 may have induced persistent reductions in productivity and employment.”

For people who had been at their job for less than two years before the pandemic, the churn was much higher, according to the study. Almost 62 per cent had separated from their workers a year later, versus about 16 per cent for those who had been employed by the same firm for at least a decade.

This could help explain the current labor shortage, especially in the restaurant, entertainment and hotel industries, which lost the most jobs during the pandemic and are now struggling to hire fast to meet brisk demand. Turnover is traditionally high in those sectors.

All economic crises result in job losses. But the most striking difference during the pandemic is that a quarter of workers had a new employer a year after COVID-19 hit, said Bick and Blandin, who use a benchmark U.S. Census Bureau population dataset as the basis of an online survey to collect labor data in real-time. That’s almost twice as large as the next highest rate, about 13 per cent in 1997.

“Generally, some amount of labor market churn is healthy because it indicates employers and workers alike feel confident they can find the right job and employee match,” said Daniel Zhao, an economist at the employment site Glassdoor. “However, churn is currently elevated due to the lingering hangover from the ongoing pandemic. We’re nowhere near a recovered labor market where workers are quitting out of confidence rather than need.”