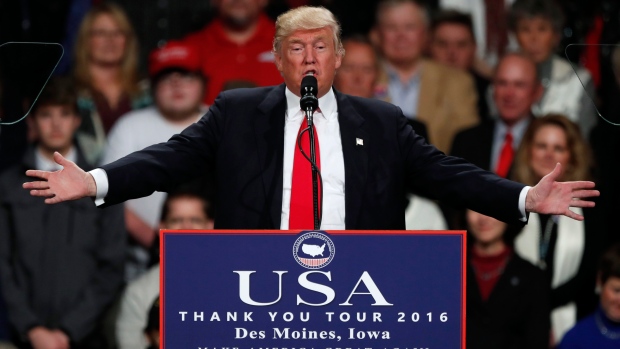 U.S. equity markets have continued to hit record highs in the wake of Donald Trump’s surprise march to the White House, with the S&P 500 rising more than five per cent and the Dow’s seven per cent rise putting it within spitting distance of the 20,000 mark.

But the rally hasn’t taken everyone along for the ride. BNN has compiled some of the biggest winners and losers that have emerged in the President-elect Trump era.

Financials (XLF) have proven the biggest benefactors of Trump’s win with anticipation of looser regulations, including changes to Dodd-Frank, paired with rising rates helping to boost stock prices. Money-centre banks like Goldman Sachs (GS.N) and Bank of America (BAC.N) have both gained more than 30 per cent, but the regional banks haven’t fallen too far behind: Fifth Third Bancorp (FITB.O), Regions Financial (RF.N) and KeyCorp (KEY.N) have all risen more than 20 per cent.

The telecom (XTL) index has been one of the surprise stars of the market rally, rising despite the industry being outside most of Trump’s core campaign promises. Mark Jamison, a former Sprint lobbyist and member of Trump’s Federal Communications Commission transition team, has questioned the usefulness of the FCC -- calling it “overkill” when it comes to preventing monopolies, which has prompted speculation of looser regulations. Four of the five constituents of the group have pushed higher in the last month, with only CenturyLink (CTL.N) posting a modestly negative return.

Energy (XLF) stocks have benefitted from numerous factors over the course of the past month, with OPEC’s agreement to cut production to 32.5 million barrels per day helping to push oil back above US$50 per barrel. Trump’s proposed policies have also been a boost for the group, notably his plan to pare regulations and encourage drilling activity. The sector boasts two of the top three performers on the S&P 500 post-election, with offshore driller TransOcean (RIG.N) posting a near-45 per cent return and shale-gas driller Chesapeake Energy (CHK.N) rising more than 30 per cent.

Only three of the 11 S&P 500 subindices have posted negative returns over the course of the last month, with health care (IYH) as the lead laggard. The group has dropped more than four per cent after an initial relief rally, as fears of Hillary Clinton cracking down on drug prices evaporated. However, Trump has signaled he, too, is unhappy with high prices for medical treatments, telling Time Magazine he would drive down the cost of prescription drugs. Sector members Mallinckrodt (MNK.N) and Vertex Pharmaceuticals (VRTX.O) are the two worst-performing stocks on the S&P 500 since Trump swept to victory.

Private prison companies have surged in the wake of Trump’s victory, with CoreCivic (CXW.N) soaring more than 70 per cent and GEO Group (GEO.N) rising more than 40 per cent. Shares of both companies had been badly battered on expectations of a Clinton presidency, one in which she vowed to put an end to privately-run prisons.