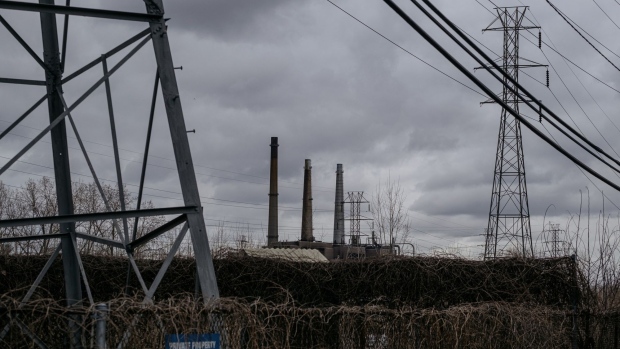 The former DTE Energy River Rouge coal-fired power plant in River Rouge, Michigan, U.S., on Tuesday, April 19, 2022. A flurry of state and local governments in the U.S. are enrolling public-owned forests in carbon projects that could earn them tens of millions of dollars but provide little new help in the fight against climate change. Photographer: Erin Kirkland/Bloomberg , Bloomberg

(Bloomberg) -- Senate Democrats plan to finish their climate, health and tax package this weekend, but only after enduring a marathon “vote-a-rama,” the quirky procedure that requires slogging through a theoretically unlimited number of amendments.

The gantlet of tough, politically fraught votes is expected to take all night Saturday into Sunday. It’s the trade-off under the Senate’s intricate rules for Democrats to circumvent a Republican filibuster and pass the legislation with a simple majority.

With midterm elections coming up in November, Republicans plan to put vulnerable Senate Democrats on the spot by forcing votes on contentious issues such as taxes, fossil fuels and immigration. If even one Senate Democrat peels off, they have a shot at altering the bill given the chamber’s 50-50 split.

Republicans haven’t been shy about their goals. John Thune of South Dakota, the second-ranking GOP senator, said they would try to pass amendments designed to make it tougher for Democrats to stay unified on the legislation.

Democrats are trying to mitigate any risk. Senators including Joe Manchin of West Virginia, Elizabeth Warren of Massachusetts and John Hickenlooper of Colorado said they’re focused on preserving the 50 votes for the bill rather than trying to tweak the bill more to their liking.

However, independent Bernie Sanders of Vermont, who caucuses with Democrats, is planning amendments aimed at expanding social services like Medicare benefits at the expense of wealthy taxpayers and corporations. Those could put some Democrats on the spot.

Amendments have to affect the budget under the chamber’s rules in order to pass with a simple majority. That will be determined by rulings from the Democrat sitting as chair of the proceedings as advised by the parliamentarian, Elizabeth MacDonough.

Vice President Kamala Harris, in her role as president of the Senate, broke a tie vote to proceed to the measure, with the Senate advancing it 51-50 Saturday evening.

While the rules allow unlimited amendments, there is a practical end point: exhaustion. Senators in both parties aren’t keen on spending multiple days at their desks nonstop. If Republicans keep proposing changes as a de facto filibuster, the chair could short-circuit the process and refuse to allow additional amendments.

Last year, Senate Majority Leader Chuck Schumer used another arcane part of the rule to undo some of the changes to President Joe Biden’s Covid-19 rescue package with one final amendment that essentially negated all that had been passed during the all-night session. He’ll need to have Democratic unity to do so again, but Manchin has previously indicated such a move wouldn’t have his support.

Once the senators all agree to stop voting, they would hold a final vote on passage. If all senators are present, Democrats will need Harris again to break a tie and pass the bill 51-50.

All hands will be on deck through the night, a fact underscored when Patrick Leahy of Vermont, who recently underwent surgery for a broken hip, showed up in a wheelchair to vote to cheers Saturday.

The Senate would then send the bill to the House for final passage before it heads to President Joe Biden’s desk.