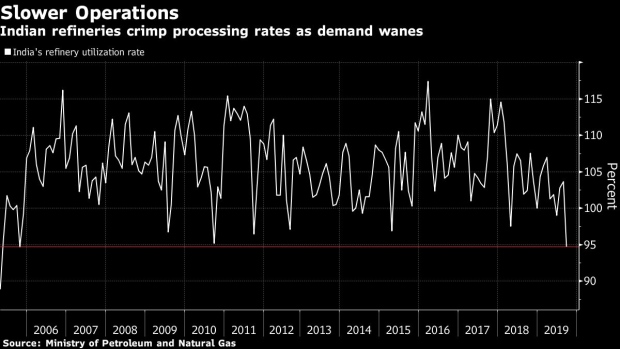 (Bloomberg) -- Once a major contributor to Asia’s status as the world’s top oil-importing region, India’s crude purchases and refinery run rates are plummeting as its economy rapidly decelerates.

Refiners across the South Asian nation operated fuel-producing units at the slowest pace in 15 years last month, and bought the least crude in more than two years, government data showed. On a seasonally adjusted basis, September imports were below the five-year average, falling under that level for the second time in 2019.

Waning consumption and a deteriorating outlook across India are deepening a slowdown in Asia’s third-largest economy. Expansion in the nation’s gross domestic product cooled for a fifth straight quarter to 5% in the April to June period, while the World Bank cut its forecast by the most among countries in South Asia.

Refinery capacity utilization in India was at about 95% as several units were left idled. Exports of diesel, the most consumed motor fuel and a barometer of economic activity, picked up as local demand waned.

To contact the reporters on this story: Debjit Chakraborty in New Delhi at dchakrabor10@bloomberg.net;Dhwani Pandya in Mumbai at dpandya11@bloomberg.net