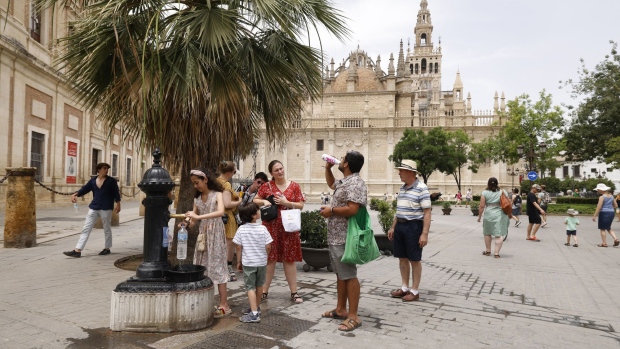 Visitors to Seville fill their water bottles from a public fountain during a heat wave in June. Photographer: Marcelo del Pozo/Bloomberg , Bloomberg

Many Spanish kids’ childhood memories of summer are peppered with sweat, long siestas and street games around our grandmothers, who would take their foldable chairs outside as soon as the sun set, spending the coolest hours of the day chatting with neighbors and friends.

The tradition, known in Spanish as charla al fresco or “cool chat,” is so entrenched that last year a village in the southern region of Andalucia sought UNESCO World Heritage status for it. The village’s mayor argued the old habit is in danger because of the widespread use of social media, which encourages people to stare at their phones or computers rather than engage in real life conversations.

This summer’s record-high temperatures show it’s not just social media threatening Europe’s ancient traditions. Scorching heat — even at night— has kept Spanish grandmas indoors in many villages. As the worst heat wave on record advanced through the continent’s west this summer, villages in France and the UK rushed to cancel public gatherings, street markets and festivals to protect citizens from deadly temperatures.

None of it is news in Seville, where people don’t leave their homes until 8 p.m. in summer, and where local festivals are scheduled to start at 10 p.m. Built beside the Guadalquivir river during the Middle Ages, the Spanish city regularly registers temperatures above 40 degrees Celsius (104 degrees Fahrenheit) during July and August. It will get worse there as the planet warms, with scientists expecting several consecutive days of temperatures above 50°C happening within the next five to 10 years.

“Our responsibility is to take measures to avoid a scenario in which this city becomes unlivable,” said Seville Mayor Antonio Muñoz. “We need to develop measures to mitigate the effects of climate change.”

Fighting heat in Seville is not new — pictures from as far back as the 1940s show streets covered with large awnings to shield people from direct sunlight and help keep some of the most popular parts of the city cool. Over the past few years, these measures have been extended to taxi stops, public playgrounds, schools and hospital entrances.

“We call it a policy of shade,” Muñoz said. “It’s just one of the many things we need to do if we want to be able to use the streets — from children playing to people who want to do their shopping or just sit outside and talk.”

The city is using every other strategy in the heat adaptation playbook — installing public fountains, planting 5,000 trees a year and switching to construction materials that reflect heat. Because extreme heat requires extreme measures, earlier this summer Seville became the first city in the world to name and categorize heat waves in the same way the US or Asian nations name hurricanes and typhoons.

Heat wave Zoe was designated as a category 3 heat event, the most serious of the three levels contemplated in the categorization system. It hit Seville at the end of July and brought minimum temperatures of around 30°C and maximum temperatures above 43°C. The pilot initiative, backed by the Adrienne Arsht-Rockefeller Foundation Resilience Center, a nonprofit promoting climate resilience solutions, means every named heat wave will trigger measures like opening city pools and water parks, or deploying health workers to check on vulnerable populations.

“Heat kills more people than any other climate-driven hazard and it doesn’t have to be that way,” said Arsht-Rock director Kathy Baughman McLeod. “The silent, invisible nature of it makes it extra challenging to convey these messages of how serious it is.”

But adapting to heat today is not enough. At the current level of emissions and with the latest policies to fight climate change, global temperatures are still expected to increase between 2.4°C and 2.7°C by the end of the century, from the average of pre-industrial times, according to nonprofit Climate Action Tracker. That level of warming would make life in some parts of the world impossible.

Seville’s answer to this forecast is CartujaQanat, a 5-million-euro ($5.1 million) pilot project that aims to lower average temperatures around one street by 10°C. The project, 80% financed with European Union funds and scheduled to be completed in October, is led by Seville’s city hall and backed by institutions including Universidad de Sevilla.

To lower average temperatures, engineers have come up with a way to replicate the ancient Persian technology of the qanats. These systems,  developed over 1,000 years ago, consist of building underground canals that carry water across a large area that needs to be cooled. Vertical shafts pierced along the canal take air underground to the surface, lowering temperatures above ground.

The new system will replace an old qanat, which was first used in modern Seville in 1992 as an experimental project, while the city was hosting the Universal Exposition. It helped lower the street’s temperature by 3°C, but the engines that kept the canal’s water running were powered with fossil fuels. Now, technology developed by engineers at Universidad de Sevilla allows this system to run on renewable power.

In another experimental twist, the cool underground water will be pumped above ground and directed toward the top of a building. From there, it will trickle down porous walls, helping lower temperatures inside and outside. Special benches connected to this system will create surfaces for people to sit and recover from extreme heat, said Lucas Perea, an official at EMASESA, Sevilla’s public water company.

“This sounds like science fiction, but it is applicable to a bunch of spaces around the city,” he said. “You just need a bit of imagination, and the implication of local stakeholders.”

While EMASESA is helping develop the CartujaQanat project, it will also use the same technology in a number of so-called “comfort rooms” along one of Seville’s main avenues, where people will be able to seek refuge from sweltering heat. It is in talks with the municipal metro and bus companies to set up a similar system inside the city’s main communication hubs.

“Old traditions like charlas al fresco don’t have to disappear,” Perea said. “But they will be harder and harder to keep if we don’t come up with ways to manage public spaces as the world heats.”