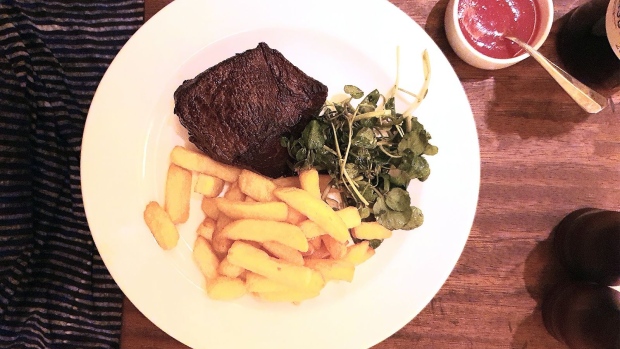 (Bloomberg) -- One of the U.K.’s most-respected steak-house groups is offering to feed guests for just 10 pounds ($13), seeking to entice a whole new crowd of diners as restaurants try to bounce back from the coronavirus lockdown.

Hawksmoor has signed up for the government’s Eat Out to Help Out Scheme, whereby diners can get 50% off the price of their food in August, up to a maximum of 10 pounds, Mondays through Wednesdays at participating establishments. The restaurant has cut the price of its 300-gram (10.6oz) 35-day dry-aged rump steak with chips and sauce to 20 pounds — from 30 pounds — to come up with the offer. More than 5,000 diners made bookings within six hours of the promotion on July 27, filling the restaurants on normally quiet days.

Hawksmoor is just one of the restaurants using the subsidy to lure back customers after the government ordered restaurants closed for more than four months. (The lockdown was imposed on March 23 and partially lifted on July 4.)

D&D London, which owns some of the city’s best known restaurants including Bluebird and Le Pont de la Tour, is serving bargain three-course meals at all 18 of the U.K. establishments it has so far reopened, with prices ranging from 15 pounds to 30 pounds after the discount.

At Smokestak barbecue restaurant in east London, known for punchy food such as beef brisket and ginger and chili slaw, chef David Carter will serve four dishes for 10 pounds. Restaurants have to register for Eat Out to Help Out, but for diners it is just a question of showing up. There’s no need to register, there are no vouchers and you can go back as often as you like.

Boisdale, another steak house, is doing something similar, serving dry-aged rib-eye with chips & sauce for 11 pounds.

But Hawksmoor’s offer has attracted the most attention on social media. The restaurant is a favorite of the food crowd, known for the quality of its offerings, with some of the best service in London and a commitment to small British farms. All that comes at a price. The porterhouse steak, for example, is 13.50 pounds for 100g — with a normal minimum of 500g — while chips and sauce cost extra. You may face a hefty bill even before you start exploring the extensive wine list or try a few cocktails.

So how is the bargain steak and chips? I went along to Hawksmoor Seven Dials to preview it this week and it was excellent: Beautiful meat with the crispiest of triple-cooked chips and a deep anchovy hollandaise sauce. I have paid considerably more for steaks that I enjoyed less in New York and London.

Will Beckett, who co-founded Hawksmoor with his business partner Huw Gott, said they realized they needed to do something because central London was so quiet when the government eased the lockdown. But is the 10 pound offer is just a gimmick?

“If you mean, is it a quirky marketing thing to get people into the restaurant? Yes, that is exactly what it is. The scheme is an opportunity to do something fun and entrepreneurial,” Beckett says. “It is a really good scheme and the industry should grab it with both hands and do interesting things with it. We are just one of a number of restaurants that are embracing it.”

Beckett is happy, so far, with the reaction from customers. “This is an interesting time. A load of people are really happy to go out but others need coaxing and some just won’t. Anything that is wildly positive feels good,” he says.

But what if diners show up, occupy valuable space in one of the restaurants, and just order 10 pound steaks with tap water?

“They will be absolutely within their right,” Beckett says. “Or if they want a Premier Grand Cru Bordeaux, that will be fine, too.”