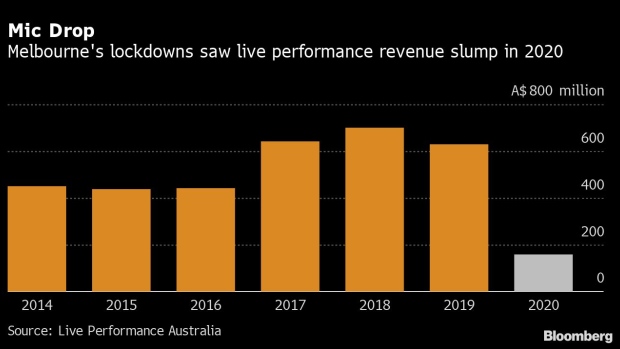 Two cyclists take a break along a coastal path in Melbourne, Australia, on Wednesday, Sept. 8, 2021. Australian Prime Minister Scott Morrison has doubled down on his plan to end pandemic lockdowns and state border closures by Christmas. , Bloomberg

(Bloomberg) -- A renowned coffee culture is a hallmark of life in Melbourne, known as one of the world’s most livable cities. But as the pandemic catapulted the city into the ranks of the world’s most restricted, caffeine took on a new role: one of few ways to make human contact.

Nomadi Coffee House, in the Australian city’s southeast, saw its bean volume increase to half a ton this year, according to head roaster David Bueno. Locals have been coming by for up to three takeout coffees a day just “so they go outside,” he said. Now, after more than 260 cumulative days under stay-home orders, on Friday Melbourne’s five million residents finally taste freedom.

Movement restrictions have been lifted, while venues from salons to restaurants are reopening for fully-vaccinated people after hitting a statewide target of 70% full inoculation among those aged 16 and older. Art galleries, gyms and other venues are expected to begin opening their doors early next month, when Victoria state reaches the 80% threshold.

The easing marks an end to six separate stay-home mandates over 18 months, as authorities adhered to a strict Covid Zero policy they have now abandoned in favor of living with the virus as endemic. It follows the reopening of neighboring New South Wales on October 11 and federal leader Scott Morrison’s doubling down on his plan to end state border closures by Christmas.

The city enforced some of the world’s toughest virus measures, managing to keep case counts relatively low compared with global hotspots. Victoria state, with a population of roughly 6.5 million people, has recorded over 73,000 cases and 1,005 deaths since the beginning of the pandemic, mostly in Melbourne. That’s compared to Australia’s biggest state, New South Wales -- home to about 8 million -- which has clocked over 72,000 cases and 543 deaths.

The suppression level achieved has not been without costs. The lockdowns have been part of a global debate about the impact of such stringent Covid-related orders on mental health. Headspace, a Melbourne-based foundation providing 12 to 25 year olds with intervention services, said two in five young Australians feel their mental health has deteriorated since the pandemic’s onset.

“Just two years ago we were averaging under 2,500 calls a day. Today we are regularly seeing more than 3,500 -- a 40% increase,” Lifeline chairman John Brogden said in a statement.

The local economy has also taken a hit. But economists expect consumption in Victoria to pick up in the coming weeks, following similar post-easing moves in NSW.

The Westpac Card Tracker index, which is based on millions of daily card transactions processed by Westpac Banking Corp., rose to a three-month high in the Oct. 16 week, led by NSW, with activity still soft in Victoria.

“Card activity in travel and related segments has been the standout underperformer throughout Covid, but is now rising and looks likely to see stronger gains in the weeks ahead,” Westpac said in a Thursday note.

The sector is a driver for Melbourne’s hospitality and tourism sectors, pumping billions of dollars into the economy, said Evelyn Richardson, chief executive of Live Performance Australia. But it will face challenges -- venues will still need to adhere to restrictions related to the easing.

“While much of the economy will be returning to pre-Covid activity, the live music and entertainment industry will be constrained by venue capacity and border restrictions for some months,” she said.

For Jay Fredricson, manager at Plain Sailing, an eatery in the trendy Elwood neighborhood, the mood is high. “We’re so happy to have people back again,” he said as he readied to welcome diners. “It’s been six times now, so we know what to prepare for.”