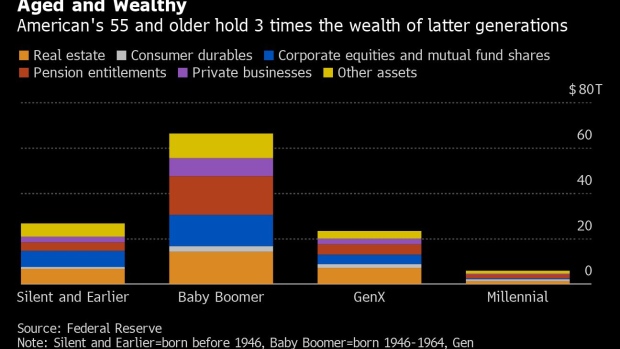 (Bloomberg) -- The U.S.’s historic economic expansion has so enriched one-percenters they now hold almost as much wealth as the middle- and upper-middle classes combined.

The top 1% of American households have enjoyed huge returns in the stock market in the past decade, to the point that they now control more than half of the equity in U.S. public and private companies, according to data from the Federal Reserve. Those fat portfolios have America’s elite gobbling up an ever-bigger piece of the pie.

The very richest had assets of about $35.4 trillion in the second quarter, or just shy of the $36.9 trillion held by the tens of millions of people who make up the 50th percentile to the 90th percentile of Americans -- much of the middle and upper-middle classes.

Chalk up at least part of their good fortune to interest rates, said Stephen Colavito, chief market strategist at Lakeview Capital Partners, an Atlanta-based investment firm for high-net-worth investors. People can’t get much of a return on certificates of deposits and other passive investments, so they’ve pumped money into stocks and propped up the market overall, he said.

In turn, those investments make the wealthy eligible to put money into exclusive hedge funds and private equity funds. Many such funds require $5 million of investments to qualify.

“The wealthier that the wealthy get, the more opportunity they have,” Colavito said.

It may not be long before one-percenters actually surpass the middle and upper-middle classes. Household wealth in the upper-most bracket grew by $650 billion in the second quarter of 2019, while Americans in the 50th to 90th percentiles saw a $210 billion gain.

For now, those Americans in 90th to 99th percentiles -- well-to-do, but not the super rich -- still control the biggest share of wealth, with $42.6 trillion in assets.

The lone group left out of the fun: the bottom 50% of Americans. Those households have 35.7% of liabilities in the U.S. and just 6.1% of assets.

Age also plays a role in wealth. Some young people have recently taken to mocking older Americans for being out of touch, hurling the term “OK Boomer” around social media. However, Baby Boomers born between the end of the Second World War and 1964 may have the last laugh. They had wealth that was 11 times higher than that of millennials as of the second quarter.

To contact the reporters on this story: Alex Tanzi in Washington at atanzi@bloomberg.net;Michael Sasso in Atlanta at msasso9@bloomberg.net

To contact the editors responsible for this story: Sarah McGregor at smcgregor5@bloomberg.net, Anita Sharpe