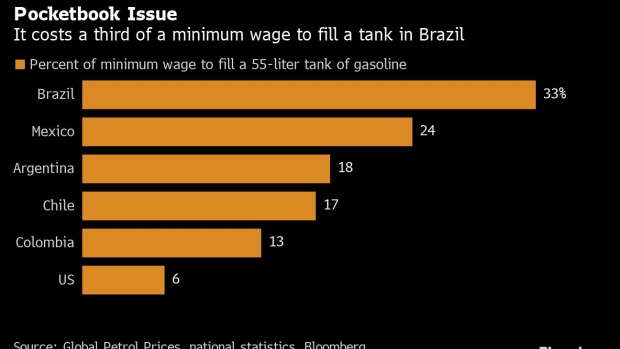 A worker refuels a vehicle at a Petroleo Brasileiro SA (Petrobras) gas station in Rio de Janeiro, Brazil, on Friday, April 8, 2022. Brazil’s consumer prices surged past all forecasts in March following the national oil company’s decision to jack up fuel costs, adding to global inflationary pressures in the wake of Russia’s invasion of Ukraine. , Bloomberg

(Bloomberg) -- Brazil is taking steps to ease pain at the pump in a country where it costs more to fill your tank than in any other major Latin American economy.

High fuel prices are one of the main complaints against President Jair Bolsonaro as an October presidential election nears. More Brazilians blame him for high gasoline than Russia’s invasion of Ukraine, according to a May 16-18 poll by Ipespe, an established local pollster.

While costly fuel has become an issue everywhere, it’s no wonder the topic is getting outsized attention in the Latin American country, where the average cost of a liter of gasoline is 7.28 reais ($1.53). Brazilians are now spending about a third of a minimum wage to fill up an average capacity 55-liter tank. In the US, that stop at the gas station would roughly be 6% of the monthly income of a worker who makes the minimum hourly wage.

Bolsonaro has responded to the growing pressure by throwing support behind legislation to cut state taxes on fuel and other items, which passed in Brazil’s lower house on Wednesday with overwhelming support and now goes to the Senate.

He has also sacked three chief executives of state-controlled Petroleo Brasileiro SA over frustration with its wholesale fuel prices that track international levels. Petrobras has underperformed other oil majors since the war in Ukraine started, mainly on concern that it will sacrifice profits at the government’s request to help contain fuel inflation.

The status of Rio de Janeiro-based Petrobras as a state-controlled company that also has private investors puts it in an awkward position when oil prices rise.

Bolsonaro says he supports privatizing the company to prevent the government from getting blamed when prices go up -- a marked shift from his position four years ago, when he said the full sale of the oil giant was off limits. Former president Luiz Inacio Lula da Silva, who leads polls for the presidential election, is in favor of having Petrobras subsidize fuel instead of paying dividends to shareholders.