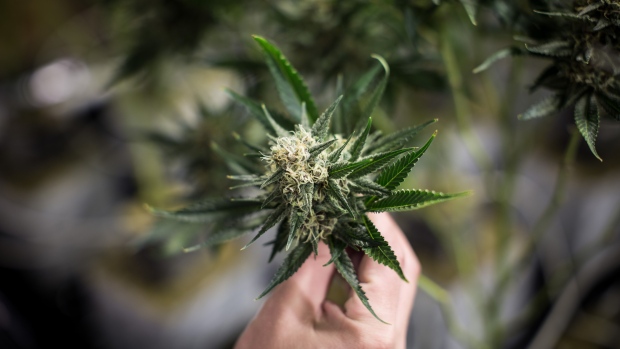 Cannabis plants grow at a WeedMD Inc. facility in Strathroy, Ontario, Canada, on Wednesday, July 17, 2019. WeedMD is one of 13 Canadian pot companies that have been granted outdoor cultivation licenses in an industry that predominantly grows in greenhouses or warehouses. Photographer: Cole Burston/Bloomberg , Bloomberg

(Bloomberg) -- Green Growth Brands Inc., once a suitor of Aphria Inc., is selling its CBD business and restructuring debt amid what the company is calling “serious financial difficulty.”

In a further sign of the problems plaguing the cannabis industry, Green Growth said it will sell its CBD business to BRN Group Inc., a cannabis brand-management company, so it can focus on its marijuana operations. No terms were given.

Shares tumbled as much as 42%, the most ever, to 25 cents in Toronto on Tuesday.

Green Growth had previously positioned itself as a CBD retailer, touting its mall kiosks and its partnerships with the likes of Abercrombie & Fitch Co., DSW shoe stores and Authentic Brands Group.

It also made a splashy attempt to enter the Canadian cannabis industry with a C$2.4 billion hostile bid for Aphria in January 2019 after a short-seller attack triggered a plunge that erased more than half of Aphria’s market value. Since then, Aphria has posted three consecutive quarters of Ebitda profitability.

Green Growth remains confident in the future potential of CBD, but “with high potential in the future comes material overhead costs and other obligations in the near term,” CEO Peter Horvath said in a statement. “These near-term overhead costs and other obligations, together with constraints on liquidity, have posed significant challenges that have hindered us from growing the CBD business to its full potential.”

Under the so-called stalking horse agreement with BRN, Green Growth will enter into a 30-day “go shop” period during which it can actively solicit other offers. The company will hold as much as a 20% carried interest in the CBD business after the deal closes.

Holders of $23.7 million of 8% convertible debentures maturing Oct. 18 have agreed to extend the maturity to 2024, lower the interest rate to 5% and reduce the conversion price. Green Growth also intends to raise up to $30 million through a share sale, with its biggest shareholder All Js Greenspace LLC agreeing to buy $10 million.

To contact the editors responsible for this story: Brad Olesen at bolesen3@bloomberg.net, Richard Richtmyer, Will Daley